Posted on November 13 2015 by Alexis Anderson 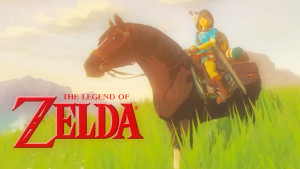 During yesterday’s Nintendo Direct, many Zelda fans had scrambled to collect themselves after the spasms that occurred following the breaking Twilight Princess HD and Zelda Wii U news. One such fan was Youtube’s HMK; once composed, he produced both analysis and reaction videos for the Zelda Wii U news. He scrutinized the mere thirteen second teaser and detailed every aspect of it that may give us an impression of the upcoming title as a whole. Some of what he found was quite easy to miss, so hit the jump to see the analysis!

Looking at the scenery, we see the vast field, the mountain region, some goats, and a volcano that could potentially be Death Mountain. More interesting than that, HMK noticed a journal on Link’s hip bearing a Sheikah symbol (lending credence to his cape maybe being a Sheikah headdress) and possibly a symbol of Majora’s mask on the pouch of his bag. Also worth noting is the sheer size of Link’s sword, it’s markedly larger than the traditional Master Sword and doesn’t appear to be sheathed.

Below is HMK’s reaction video, in which he discusses his frustration with how little information we’re getting about Zelda Wii U and his hopes for when we may get more intel:

I’m also really banking on at least a reveal of the game’s name during the Game Awards, and hopefully a more steady flow of screenshots and progress reports thereafter.

What do you think of Link possibly being associated with the Sheikah? What other details about the game do you hope to see shared with the public in the coming months? Are you happy that the game’s been confirmed on the Wii U for 2016? Share your thoughts in the comments!