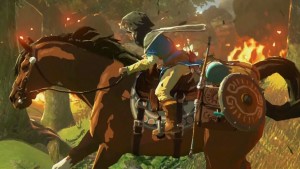 The Zelda fan-base was collectively vexed when Nintendo made the announcement that Zelda Wii U would no longer be released in 2015 nor be shown at this year’s E3, but Nintendo may be applying a bandage to at least one of these sore wounds. Zelda publication The Hidden Triforce was tipped off by a GameStop employee who overheard his store’s Nintendo Representative spilling fact after fact about Zelda Wii U, and amassed a nice list of rumors. The game is said to be compatible with several Amiibo, will not place Ganondorf as its main antagonist, and will be shown at E3 with a trailer and official art.
That’s only a taste of these rumors, devour the rest after the jump!

The Hidden Triforce stresses that none of this information has been confirmed by Nintendo (in other words, it may just be another unreliable mouth-run like the Netflix rumors). Here are all of the Zelda Wii U factoids from The Hidden Triforce’s report:

There you have it, now it’s up to you to decide whether you believe the hype. Do these rumors seem like plausible claims? Do any of these particularly excite you? What are you hoping to see from this maybe E3 trailer? Release your thoughts in the comments!