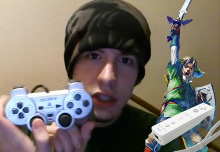 Okay guys, here’s the video I promised last time. This is a video discussion about a control scheme compromise I’m proposing for Zelda Wii U. You can watch the video here or check out the video embed after the jump.

As you probably know, Nintendo’s talked about using Wii MotionPlus again in the next console Zelda game, and I’ve also made a prediction that they’ll do this. However, recently Miyamoto suggested they will be changing the controls based on feedback the motion controls in Skyward Sword received, so I think that if they’re going to consider removing the motion controls, they try my suggestion out.

So what do you guys think? Do you want to see motion controls again in Zelda Wii U or did you dislike it in Skyward Sword? Do you like my compromise or does it have problems? Tell me your thoughts in the comments!