Zelda Theory: Songs of the Undead 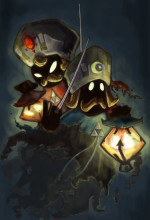 Sharp and Flat by ABlume

There are a few songs between Ocarina of Time and Majora’s Mask that some players don’t consider as much more than what they seem to be. The Sun’s Song is as it sounds; it changes night to day and vice versa, whereas The Song of Storms makes it rain and drains the well in Kakariko Village in order for our hero to continue on his journey to defeat Ganondorf. However, these songs and a couple others involving the spirits of the Zelda universe may have a deeper role than players have always initially thought. Make the jump to here VortexxyGaming’s theory on the true role of these otherwise seemingly meaningless Zelda tunes.

VortexxyGaming is a theorist YouTube channel ran by Vortex, who explains in this video that songs from Ocarina of Time and Majora’s Mask are doing a lot more than we think they are. First she starts discussing the Sun’s Song and how the Composer Brother’s composed this song with more than just the intention to alter the flow of time in mind. We know that in Ocarina of Time the brothers are killed by Ganondorf in order to protect the melody of the Royal Family. Vortex suggests that the reason Ganondorf wanted the Sun’s Song so badly is because he wrongly assumed that it- as a song that alters time- was the song needed to open the Sacred Realm in order to reach the Triforce. That makes sense as to why Ganondorf would kill for that kind of information, but The Sun’s Song has a different purpose altogether. It not only has the ability to alter time and change night to day, but also the power to repel the undead that lurk throughout Hyrule. Vortex explains that the Composer Brother’s laid the song to rest with the Royal Family in Kakariko Village and that it wasn’t a coincidence that the village is the home to the majority of the dead found in Hyrule. Because also found in Kakariko Village is the Song of Storms.

In Vortex’s theory, it’s suggested that only the player is the one able to hear the actual Song of Storms because the magic in the Ocarina of Time perceives the song differently. This is shown as even Guru-Guru, the man within the windmill of Kakariko Village, doesn’t realize that the song he is playing to keep the windmill running smoothly and the one he heard Link play as a child are one in the same. With the windmill being connected to the graveyard, we can assume that the Song of Storms that Guru-Guru is constantly playing is being channeled through the village underground- and perhaps even through the Shadow Temple- and when teamed with the power of the Sun’s Song, they act as a barrier to keep the undead sealed away and the village safe.

The concept of the Song of Storms keeping the undead at bay is similar to the song Farewell to Gibdos in Majora’s Mask. When it’s played in Ikana Canyon from the Music Box House, the Gibdo that surround the house are then thrust back underground. Without the consistent playing of the song, the Gibdo would likely return. Perhaps it is the same in Kakariko village. After all, Link plays the Song of Storms in the past, using the magic in the notes from the Ocarina of Time to drain the well, and finds that disrupting Guru-Guru’s notes has consequences concerning the Shadow Temple in the future.

Vortex goes into more detail in describing the deeper roles of the songs connected to the undead in her video above. I found the whole concept rather interesting. If you enjoyed Vortex’s Zelda theory her YouTube channel is chalk full of them, from song and character theories, to item and temple theories. They’re definitely worth taking a look at.

What do you guys think about the songs of the undead? Have you ever considered the idea that the Song of Storms was more than just a song that caused storms? Which other Zelda tunes may we be misinterpreting? As always, leave your thoughts in the comments below!