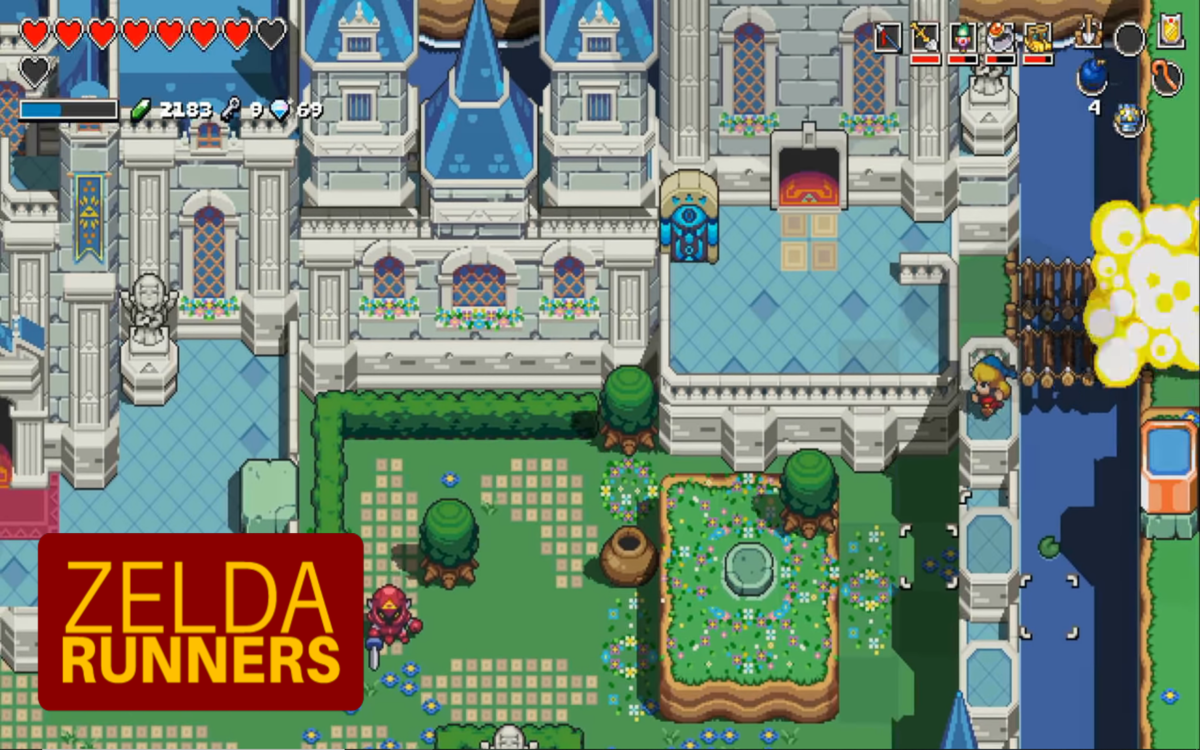 Welcome back to Zelda Runners, your bi-weekly installment of all things Zelda speedrunning. This week, thanks to the inclusion of the Cadence of Hyrule, we’ll be taking a closer look at the game’s categories and rulesets in Glitch Exhibition. I’ll also have a chat with an Ocarina of Time runner and, speaking of Ocarina of Time… 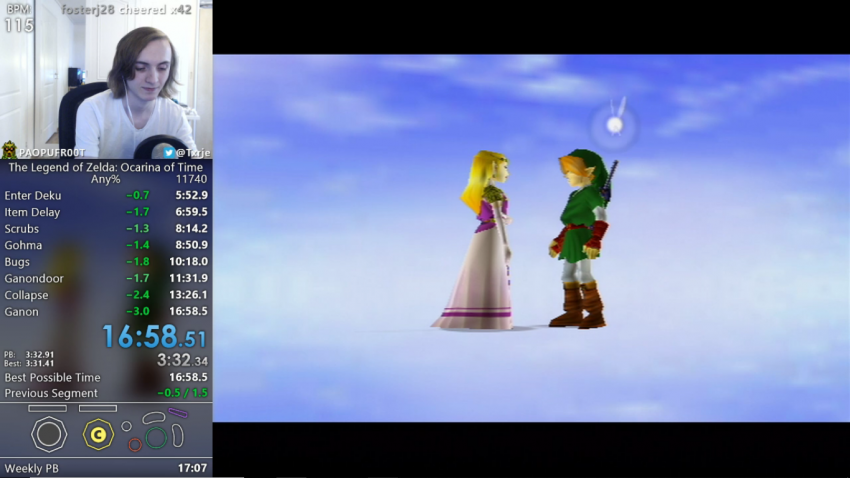 The Ocarina of Time any% world record has once again been broken, for the first time being brought under the 17 minute mark. Runner Torje set the new 16:58 record just over a week ago, an improvement of 3 seconds of his previous 17:01 time. The current route makes use of tricks known as GIM (Get Item Manipulation) and Ganondoor to transition straight from fighting Gohma to the final Castle Escape sequence and Ganon Battle. The category is famed for its incredibly short but complex route, and gains a lot of attention whenever a milestone like this is reached. Could this be the last time a minute barrier is broken in the game? I asked my spotlight this week about that, and you can find his answer later on in the article! You can view the whole run here.

If you scroll down the page to the Round Up section, you’ll notice a pretty large chunk is dedicated this week to Cadence of Hyrule, which I’m now including in my round up. As it’s a brand new game (well, new-ish now), there’s obviously a lot of new terminology to get used to. To help you (and me) get familiar with it, here’s my quick run down of the game’s new categories, and their rulesets. 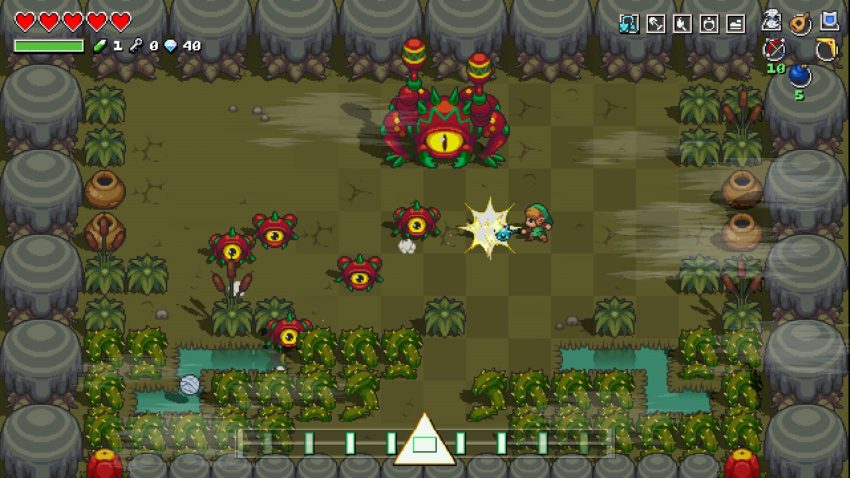 Runs follow a system of different rulesets, that can be applied to different categories (mix and match style). At the very base a run will either be Randomized or Seeded. If the run is randomized, this means the runner had no say over the location of items and caves, and simply had to optimize their route as they went along. Seeded, on the other hand, means the runner uses the same seed each time, and will therefor know the location of items and the layouts of caves and dungeons beforehand. This allows them to plan ahead of time, much like other traditional speedrun routes.

Up next we have the requirements of the run itself. There are 3 main categories here – All Dungeons, 100%, and Any%. These are all fairly explanatory. All Dungeons requires the runner to beat all 4 bosses and collect all 4 instruments, then beat Ganon. Any% just requires the runner to beat Ganon, and is the only category in which this game’s Barrier Skip is allowed. 100% requires pretty much every condition to be met, including map squares, Sheikah Stones, Permanent Items, all weapons, and max hearts and stamina. 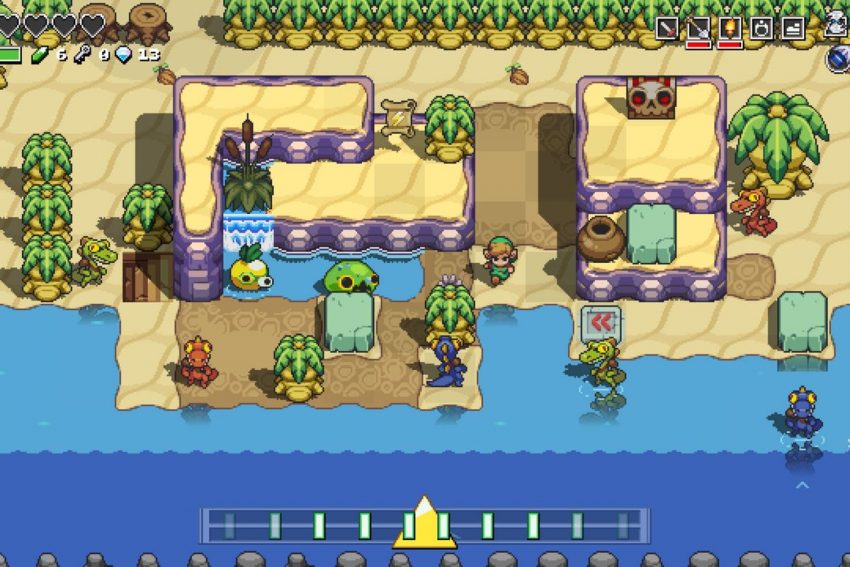 There are a few smaller categories alongside this, including Single Character Runs (completing the All Dungeons category but with a single character), Low% (which requires the player to beat the game using no more than 5 items, alongside some other additional restrictions), Nut% (collect 20 Deku Seeds and unlock the secret character) and God Mode (complete an Any%, All Dungeons, and 100% run on the same save file in that order). There’s also Low% versions of the Single Character Runs, and 2 Player versions of All Dungeons, 100%, and Any%.

Hopefully this helps clear some things up, and I’ll be back to explain some of the more interesting glitches found in the game so far in the future!

My spotlight this week is an Australian Ocarina of Time runner. I had a chat with him about his experiences within the community, and his thoughts on the recent new Any% record. 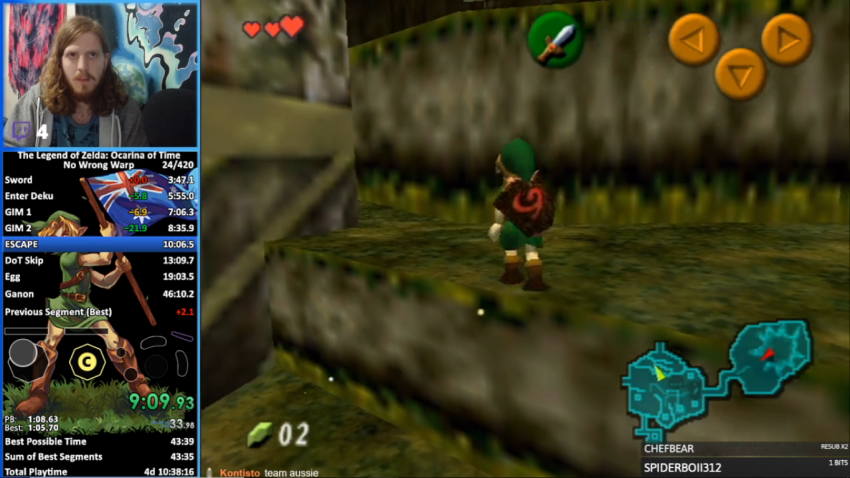 EC: Tell us a bit about yourself!

Trippp: Heya, my name is Trippp and I’m an Australian Ocarina of Time Speedrunner. My main categories at the moment are any% and No Wrong Warp although I plan on learning All Dungeons in the future. Current working on getting my any% time under 18 minutes without the use of a specific trick called Void Warp.

EC: How did you first get into speedrunning? 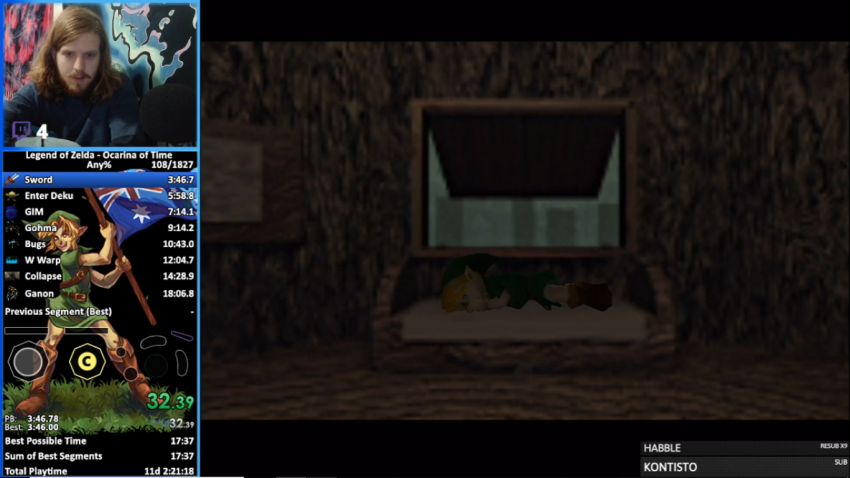 Trippp: I first got my start in speedrunning about 5 years ago when I was in highschool (I was about 17, I’m 22 now :D) I think I found speedrunning through random YouTube videos after searching and learning about Smash Bros. Melee techniques and exploits like wavedashing and found a runner named Cosmo (now Narcissa) running Ocarina of Time any%. Around this time the record was around the 18.20 mark. Ocarina of Time was always my favourite game as a kid so seeing it be beaten in such a crazy way was fascinating to me. I ended up learning the Kakariko route on emulator using an Xbox 360 controller during my time after school (sometimes during school as well :P) My interest peaked when the first 18.10 time happened Which was huge at the time, but slowly I lost interest and decided to focus on school/career as well as the route becoming super RNG based, I didn’t have the patience to learn the tricks involved. I fell out of the scene for a good few years before returning about 10/11 months ago mainly to learn about broadcasting and live streaming (I work as a video editor where my job doesn’t have a lot of creative output so Twitch was a great filler for me). The route is now built around a non RNG method of a trick called GIM (Get Item Manipulation) which allows for a bottle to be written into your inventory without needing to leave the forest and I’ve been having a great time meeting new people and pushing my PBs  down. My first PB was 25.00 5 years ago. I’m now at 18.08 with potential to get a time under 17.55

EC: The Ocarina of Time community is probably the largest of the Zelda Speedrunning communities. What’s it like being part of such a large group of people?

Trippp: The community for Ocarina of Time is fantastic. So many people in the community are more than happy to help you with stuff from newcomers to advanced players. The community does a really good job of documenting finds and routing different things. It can be a little intimidating sometimes trying to communicate if you’re brand new but that passes pretty fast. As someone who’s tried learning another Zelda speedgame, we are pretty lucky to have the community we have for the game. 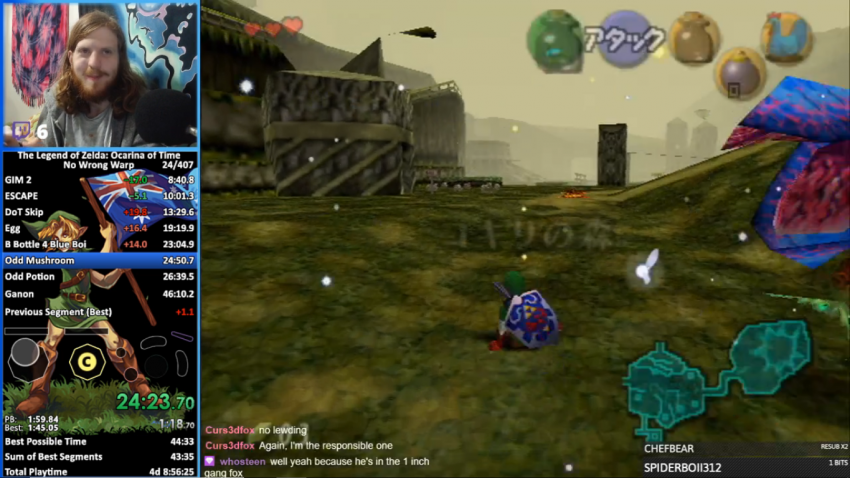 EC: You mentioned the importance of the first 18:10 time was achieved. Why do you think this milestone in particular was so important?

Trippp: The 18.10 time by Narcissa when it happened was pretty much flawless for the route that was done. The only mistake I remember seeing was 2 extra pause buffers on the Mido Skip trick (4 secs lost) but otherwise at the time it was pretty much as optimised as it could get without finding a new trick (Eventually GIM was found and made the route faster, but heavily RNG based. Luckily we don’t have to deal with RNG GIM in today’s route :D) so far only one other person has managed to beat it was Jodenstone with an 18.07 using the same route on iQue. I think that 18.10 run brought a massive amount of exposure to Ocarina of Time speedruns and speedrunning in general which in turn brings a whole new set of people and ideas to the game, especially since Narci was bringing in thousands of people to their streams. If it wasn’t for the attention that the run brought to speedrunning, I don’t think we would have as optimised of a game as today. 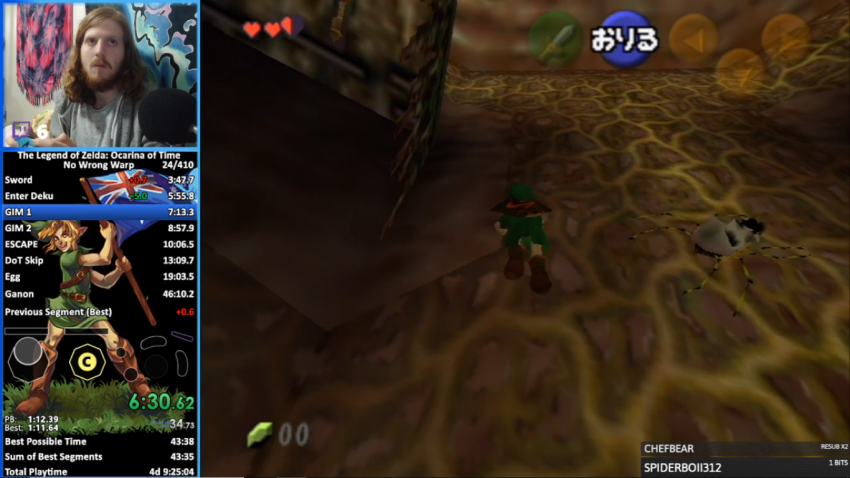 EC: So in the time it’s taken us to get through these questions, the world record was broken yet again, now down to 16:58 just last week. Do you think the game is getting to the point where it can’t possibly be optimised any further? Do you think we’ll ever see a “perfect run”?

Trippp: 16:58 is absolutely ridiculous and you gotta give Torje some serious credit for pulling it off.  I honestly believe that at least one other thing will be found that will shrink the time down but I don’t think it’ll go past sub 16 any time soon. It took quite a number of years to go from sub 18 to sub 17. I don’t really think it’s possible overall to get an absolute perfect run but within 5 secs of the best possible time I’m sure is feasible. It really depends on whether a method for skipping the lost woods section for bugs/generating bugs inside the deku tree or making a RTA viable setup for collapse cutscene skip, otherwise I don’t know if we have much else to push a sub 16 goal.

EC: Would you ever consider branching out to run other Zelda games, or even non-Zelda titles?

Trippp: I’ve tried branching out to Breath of the Wild speedrunning before but a number of factors turned me off the route and at the end of the day I wasn’t really having that much fun with it which should be the base of all gaming/speedrunning anyway. I do have some time attack WRs for Soul Calibur II but they arent really speedgames. I’m yet to find another game that I think would work well as a speedgame that also doesn’t have ridiculous amounts of RNG or score based. Having said all The Wind Waker and Skyward Sword just shaved hours of their speedruns with new tricks that were found so maybe in the future another Zelda game might make its way to my stream.

EC: If you could only run one category of one game for the rest of time, what would it be and why?

Trippp: Probably something like All Dungeons on Ocarina of Time. It would showcase a lot more of the game and I’m sure there are some more discoveries waiting to be found that would help the category.

You can find Trippp on Twitter, and catch their runs on their Twitch Channel.

There’s no upcoming events to draw your attention to this week everyone seems to take their holidays at the same time these days) but that doesn’t mean there aren’t some events on the horizon, and I’ll be sure to highlight them next time!

As for Breath of the What Just Happened? well, like I said last time, there’s quite the selection of clips to choose from. Horse lovers, this one is for you.

And that’s all I’ve got this week! I’ll be back in a few week’s time with all the latest news, but until then, happy running!

Euan is the host of Zelda Dungeon’s Speedrunning series, Zelda Runners. He can be found on Twitter and, having won the Final Splatfest, he’s now preparing for the post-apocalyptic world, ruled by the chaotic gremlin overlord Pearl.

Comments
Sorted Under: Cadence of Hyrule, Ocarina of Time, Original Content, Slider, Zelda Runners
Tagged With: No tags were found for this entry.