Zelda reference in The Wonderful 101

The Wonderful 101 is an action-packed Wii U game to be released on September 15th. Its rather simple in design, but it contains extremely exciting battles featuring the Wonderful 100, a band of heroes on a mission to wipe the invaders out of Blossom City. The game looks, well, wonderful, with its three difficulty levels, extensive content, quirky character design and… Pieces of Heart?

To learn more about this awesome reference, hit the jump!

But first, a quick explanation.

The game features something called The Vital Gauge, which acts as a health bar. When the leader takes damage, it is shown by a decrease in “Vitality.” Much like in any game with hearts or a life gauge, if it runs completely out, you die. Game Over. But Game Over doesn’t mean too much in The Wonderful 101, as you’re given an endless amount of continues, allowing you to respawn right where you died! Still, it’s a hard hit to your overall score, and dying is a disappointing experience, so of course there have to be ways to increase your Vitality Gauge, right?

Well of course! The max Vitality Gauge increases when you find other members of the Wonderful 100, but also when you find one specific item. If you find four Hero Heart Fragments, it will increase your maximum amount of hea- I mean, vitality. Honestly, they even include the word hero in the title! 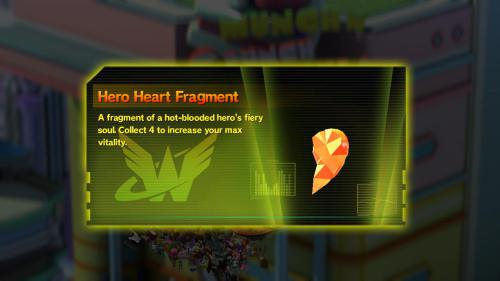 This should come as no surprise to Nintendo fans. We can all remember the pictures of Mario in Ocarina of Time or A Link to the Past, or even the Mario enemies in Link’s Awakening. And Nintendo has also included a large amount of content from their other franchises into the newer title Animal Crossing New Leaf. What I’m saying is that this isn’t a brand new idea, but it is one that’s worked in the recent past.

Personally, I think this game looks really enjoyable! I love the art style, the look of the gameplay, and especially the Zelda reference! Anyone who’s played the slightest bit of any Zelda game will recognize this not-so-subtle allusion to the franchise. I also expect to see other small references to Nintendo’s most famous characters once the game is released.

So what do you think? Will you be purchasing The Wonderful 101? Do you like the idea of Hero Heart Fragments? Tell us in the comment section below!