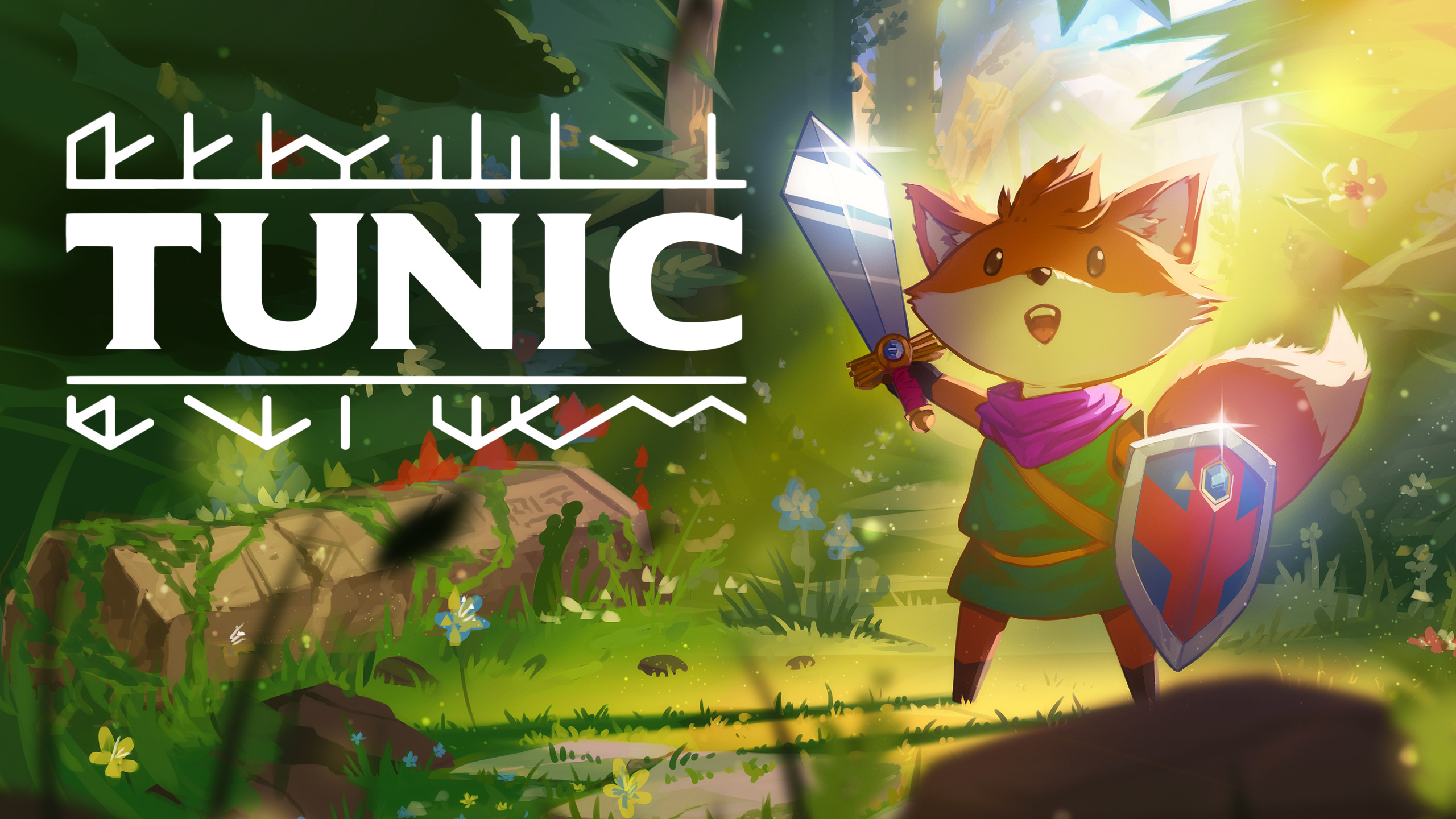 After its first official showing at E3 2017’s PC Gaming Show, Tunic (developed by Andrew Shouldice and published by Finji) found itself on the radar of many game fans who thought the title could be the Xbox’s answer to The Legend of Zelda. The similarities were immediately apparent, as Tunic wore its Zelda influence loud and proud. But now, five years after that intriguing debut, Tunic has proven itself to be more than just another Zelda imitator; it’s one of the most clever, polished, and enjoyable video game experiences to ever grace the indie scene.

Zelda fans should find Tunic‘s opening familiar. The hero, an adorable anthropomorphic fox, awakens alone on the shores of a mysterious island with nothing but the tunic on their back and a vague idea of where to proceed. This world is a hostile one, so our hero’s first priority is to find a weapon with which to defend themselves. Just beyond the opening area, they enter a small cave — perhaps a dwelling of some kind — and inside they find… a stick. Well, a stick isn’t quite the same as a wooden sword, but the scenario more or less echoes the iconic opening of the original NES Legend of Zelda.

From there, our hero must navigate the areas available to them, confront lesser monsters like slimes, and locate new gear like a sword and shield. The game’s opening few hours unfold in a fashion very similar to Link’s Awakening, with each new weapon or piece of equipment helping our hero reach new areas on the game map. The sword, for example, can cut down trees and bushes that block paths forward, while a Hookshort-type item can help the hero cross gaps. And before long, the game’s world opens up considerably to allow for some A Link Between Worlds-esque non-linearity.

While Tunic does not feature too many self-contained “dungeons” in the Zelda sense, the game’s world does feature several distinct zones that more or less fulfill that function. And like the best collections of Zelda dungeons, these zones offer a diverse palette of sights and sounds, from beachside ruins, to dark caves, to mysterious woods. The visual variety on display is only elevated by the game’s expertly crafted level design, with each zone hosting plenty of shortcuts and pathways cleverly looping back into each other. Sometimes, you’ll even be surprised to learn that a shortcut to a boss room was hiding in plain sight the entire time.

Exploration is the name of the game in Tunic. In the spirit of the first few Zelda titles, the game provides the player with a world dense in secrets. Treasure chests are hidden around just about every corner of the game map: behind bushes and bomb-able walls, cleverly obscured by the game’s isometric camera view, and often times out of reach until you find a later item / ability. The game so often rewards creative efforts to veer off the beaten path, making exploration, treasure hunting, and puzzle solving some of the most consistently satisfying aspects of the adventure.

But what types of goodies can a player find in those treasure chests? Well, you can expect to collect a lot of in-game currency, which, much like Zelda‘s rupees, can be used to buy items and stat upgrades. Because later upgrades can become rather expensive, players are incentivized to explore, fight enemies, and nab up as much money as possible. Tunic‘s economy is a lot more balanced than your average Zelda title in that regard. Players can also expect to find an assortment of limited-use items like fire crackers and foods, as well as stat upgrade items that can permanently increase HP, MP, or agility. There are even Heart Piece analogues!

On top of all of the other useful collectibles in the game, the most important items scattered across Tunic‘s world are game manual pages. That’s right: game manual pages. You see, Tunic features a complete virtual game manual that you construct, page by page, as you pick up pieces throughout the game world. This manual is amazingly authentic to manuals of the NES era — complete with art clearly inspired by the original Legend of Zelda booklet — and using such pages as in-game collectibles proves a worthy send-up of Tunic‘s biggest influences.

But the game manual is more than just a tribute to a bygone era; it actually contains vital information to proceed further into the adventure. Some pages contain detailed maps of upcoming areas, others offer clues and solutions to puzzles, and others demonstrate new powers and abilities (some the player could have performed from the very beginning). The game manual thus becomes Tunic‘s most unique and creative feature, as it effectively captures the spirit of scanning through a classic game’s instruction booklet or strategy guide for clues on where to go or what to do next. I couldn’t help but be reminded of classics like Final Fantasy or Castlevania II: Simon’s Quest flipping through the manual’s pages, with every vague clue, cryptic instruction, and easily overlooked detail capturing the often abstruse nature of old-school gaming.

As the player collects more pages, often times out of numerical order, the game opens up to more and more devilishly clever degrees of complexity. The latter parts of the game rely on the manual to such a degree that scanning its pages as one would a Where’s Waldo book becomes crucial. Definitely be on the lookout for minor details in the art or notes scribbled in the pages’ margins.  The manual system could potentially lead to minor frustrations if you miss a page and thus a vital game mechanic (like the page that teaches you how to level up your stats), but everything works more or less smoothly if you stay vigilant and thorough.

The true challenge of this unique form of puzzle solving comes from the game’s other major eccentricity: it’s fictional, in-universe language. Nearly every piece of in-game text is written in a language invented for the game, meaning you’ll be looking at a lot of unrecognizable symbols as you play. You’ll thus have to rely on the occasional word of English, various context clues, and the basic vocabulary of video games to truly decipher everything the game is trying to tell you. The experience is novel to the say the least, but it can also be very overwhelming or even frustrating when you’re first starting out. But consider this language barrier just another challenge to overcome and another skill to master. You will get better as you immerse yourself further into the game. Plus, there’s no shame in looking up a guide for some of those harder puzzles.

While all the Zelda comparisons made thus far are certainly apropos, Tunic does escape the “Zelda-like” label in a few noteworthy ways. For one, unlike even the earliest Zelda titles, Tunic employs a minimalist approach to tell its story. Details about the game’s basic scenario, conflict, and characters remain subtle and vague, so don’t go in expecting a grand, narrative-based adventure like A Link to the Past. In fact, save for a few specific moments, there aren’t really any NPCs to meet or interact with over the course of your adventure. But just because the game is light on story, that doesn’t mean that there isn’t a rich history or deep lore to discover as you play. From the very beginning, you won’t be able to shake the feeling that something dark and mysterious is hiding just beneath the game’s surface.

Let’s now talk about Tunic‘s combat, shall we? While the game draws heavily from the Zelda series for its exploration and progression, it moreso draws from the Dark Souls series for its combat. In fact, Tunic even has its own versions of Bonfires, Estus Flasks, and death runs; (Souls fans will know what I’m talking about). And in true Dark Souls fashion, Tunic‘s combat can very, very punishing, especially for those only used to The Legend of Zelda‘s brand of difficulty. If you’re not already a master of stamina bars, dodge rolls, and iFrames, the world beyond Tunic‘s opening areas will give you one harsh crash course. Enemies — especially the bosses — hit hard, the hero doesn’t have a lot of health to spare.

The difficulty of Tunic‘s combat may just be the biggest barrier to entry for many casual adventure game fans, so be sure you’re prepared to die a lot as you get into the Dark Souls mentality. Luckily, like Dark Souls, the game is extremely fair and well balanced, so you’ll always know why you failed when you inevitability do fail. The game runs exceptionally well on PC too, so you won’t lose any of those precious invincibility frames. And take it from me: nothing feels more satisfying than finally taking down a troublesome boss that’s killed you a dozen times or so.

Bringing the entire experience together are Tunic‘s gorgeous visuals and stellar soundtrack. From the game’s brightest outdoor areas to its darkest subterranean depths, Tunic never ceases to surprise you with stunning pieces of eye-candy. Even subtle things like the hero looking upward to an out-of-reach treasure chest or the camera’s use of depth-of-field demonstrate how much care and effort went into the art and animation. And one mustn’t ignore the amazing music composed by Lifeformed (of Dustforce fame). If these tunes don’t prove that a synth-based Zelda soundtrack would work, I don’t know what will.

In a gaming market crowded with homages, tributes, and send-ups, Tunic captures the spirit of old-school video games like nothing else has. It appropriates all the right gameplay elements from classics like The Legend of Zelda and Link’s Awakening, it embraces the modern hardcore sensibilities of Dark Souls, and it brings a set of its own fresh ideas — like the brilliant game manual mechanic — to the table. Though the game’s crushing difficulty and more idiosyncratic elements may not appeal to everyone, the risks taken and the creativity expressed result in a wholly unique experience that never stops surprising the player.

You owe it to yourself to try this Tunic on.

Comments
Sorted Under: Editorials, Editorials, Game Review, Games, Link's Awakening, Original Content, Slider, The Legend of Zelda, Zelda Like
Tagged With: No tags were found for this entry.