Zelda Dungeon Talks: In What Other Game Genres Could the Series Work Well? 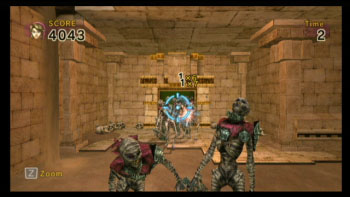 The Legend of Zelda has generally stuck to the action/adventure genre. I’m personally happy with keeping it like that. It’s what I’m familiar with and it’s what I’m used to. Others however, may be a bit more creative and wish for a different experience in a Zelda title. In Link’s Crossbow Training we saw First Person Shooter gameplay. Implementing this into a Zelda game may not necessarily be a bad thing. Stealth is also an interesting genre that could work well with the Zelda series. What do you guys think? Should we try and make the Zelda gameplay experience more interesting, or should we stick to what is traditional and classic to the series?

In this week’s edition of Zelda Dungeon Talks various staff members will share with us their opinion on the topic. Feel free to leave your own response in the comments section.

I do not think, in any way, that Zelda’s base genre of Action/Adventure should change, but there is room for some specific genres being taken on in certain parts of the games. I love a bit of stressful gameplay in my games every now and then, so I think a few genres like this could hit this series every now and then; genres that are currently considered to be sub-genres to Action/Adventure. Horror has been present in a few past games, as well as some times when Link has lost all of his equipment, or simply had very little to work with against very strong creatures. Why not put those together some time for a bit of Survival Horror? It could be fun, and the stress combined with the horror aspect could really get a player’s blood flowing. Similarly, Stealth game often catch my eye, and I think that Zelda could pull it off rather well. Finally, and I know it sounds silly, since Zelda is a Fantasy setting, but certain aspects of the Fantasy genre have never/rarely really been used in the series – specifically, settings that simulate a medieval world that has seemingly advanced technology with steampunk styles, or with partially magic/ether-based mechanisms. Yes, Zelda has plenty of fancy tech here and there, but they all seem specific to ancient dungeons. Games like Final Fantasy and Xenoblade have this tech present in everyday society. Treating this kind of tech as normal for once in a Zelda title would certainly be a change, but maybe it is something that could be explored.

The Zelda series has firmly rooted itself into the Action/Adventure genre, for which fans flock to it. There have been dabblings into other genres like Metroidvania with Adventure of Link and Hack ‘n Slash with Hyrule Warriors. There have even been minor excursions into boating simulation with Wind Waker and Phantom Hourglass. Major deviations from the genre would not be very well received by the fans, so I reckon sticking to the current formula would be best. However, exploring the limits of the genre would be an option. A possible game like this could be a 2D platforming based game ala Super Metroid, with you exploring a large world and finding items to make your way through. I do feel that such a game would work best on a handheld however. A second option would be to include things like survival horror, with greatly limiting Link’s access to consumables so the player needs to really plan for dungeons since not every fifth Keese or so they kill poops out a bundle of arrows or a bunch of bombs. Then make the dungeons cramped, dangerous and filled with lethal enemies so that the player must be on their toes at all times or be struck down in seconds. A more playful way to handle things would be adding things like interactions between the characters like in Nintendo’s popular eugenics simulator series, Fire Emblem. Have characters have fun, meaningful conversations, talk about silly things or perhaps even fall in love. It’d be fanservice of the highest caliber, but when properly executed it can add a lot to the game’s story on a large scale. Or just straight up copy Pokémon and make a Zelda-amie minigame where you get to pet your favorite Zelda character. If Nintendo does this, here’s to hoping it doesn’t get removed in the non-Japanese releases.

Zelda already incorporates elements from a number of video game genres. It isn’t strictly action or adventure or RPG, but it’s a perfect and unique combination of them all (and other genres I’m forgetting to mention). I love the series the way it is, I’ve said it before I’m afraid of change so I can’t even hypothesize what the series would be if it conformed to a different genre. I’m even afraid to see it go completely open-world, but I’m starting to warm up to the idea. So the open-world genre I guess is all I can see the game realistically moving into. Though, being truly RPG-styled with a party of fighters wouldn’t be too much of a stretch– but turn-based combat would not work for the series.

I wouldn’t mind if a Zelda game or two felt out the RPG genre. I don’t think a complete switch from the regular Zelda formula would be very well received, but if a console game in the future were to test those waters, I wouldn’t be opposed to it. In my spare time that I play videogames, and I’m not playing Zelda, I’m pretty much glued to Skyrim. If the Zelda series were to take some other aspects from a game like Skyrim– except for the open world element we’re supposed to see in Zelda Wii U- I think it would make for an interesting twist where players can put a little bit more of their own character into Link.

Although I wouldn’t want to see the mainline Zelda titles deviate from their action-adventure roots, Nintendo could afford to experiment more with the series’ handheld entries. If Zelda were to hop over to another genre, it would be best suited for a traditional RPG. A robust party of characters from various races could present the series with a ton of world-building opportunities. I also wouldn’t mind seeing a full-on strategy game in the vein of Fire Emblem — one with, as Thomas suggested, an in-depth support system among its playable cast. That sort of radical departure would lend itself better to a spin-off game, but the Zelda universe is definitely rich enough to explore even more story-intensive genres.