Zelda Dungeon Talks: What Kind of Things Would You Like the E3 Demos of Zelda Wii U/NX to Feature? 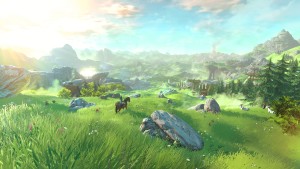 With E3 being literally right around the corner, I say let the speculation begin! In all honesty I am not even sure that I would call it speculation but more like a wish list if you will from all of us faithful Zelda fans across the world. So far, we know that the next edition to the Zelda franchise will be the main attraction for Nintendo at this years E3, but what does that mean exactly? What types of goodies does Nintendo have in store for us, will we be seeing just one demo, two, will we see more of a story focused event, or will it be more action based? So many questions to answer, and don’t even get me started on the absolute need for a proper name.

For today, our team at Zelda Dungeon has focused its attention on answering this weeks Zelda Dungeon Talks question; What kind of things would you like the E3 demos of Zelda Wii U/NX to feature? Head in past the jump to see what they want and feel free to add your opinions in the comments.

I think that they should go with some of what Skyward Sword’s demos had, with a whole early dungeon to try out, and a new item inside. But alongside that, there should be some focus on a new town, or wherever Link is from at the start of the game, as well as some views of the new open world. Since the element of exploration is such a major focus, it should be a center point, and we should be given a chance to feel what it is like to travel in this new Hyrule landscape. I also feel like there should be some look into Amiibo support, since there is to be Amiibo info exchanging between this new game and Twilight Princess’. Finally, a bit of focus on controls. I want to know what makes this game so good on Wii U, so they ought to show us a bit of how the new menus and maps work.

Thus far, the main selling point of Zelda NX is its open world. So showing that off will be one of the more interesting points of a demo. But due to the nature of a demo Nintendo would either have to cut up the open world or leave it out entirely. If they go with the latter I would like to see a dungeon with a variety of items both old and new to explore what the game will play like. I would like to see this game’s gimmick as well of course. Thus far we haven’t seen anything like it and I wonder what we can expect for this game. Finally, some actual story would be nice. What’s going on in Hyrule this time? And of course, I want to see Zelda. Will she be the more regal Zelda from Twilight Princess? The assertive Tetra from The Wind Waker? The sweetheart from Spirit Tracks or A Link Between Worlds? Will she barely be there like in Majora’s Mask? Or will she finally be playable as well? Time will tell.

Obviously I hope we get the name of the game but in terms of actual demo content, I don’t want much of the game’s plot to be revealed. So I’d rather the introduction not be included. I want to see new fighting mechanics and enemies, I’d like to romp in that vast Hyrule Field just slashing at some new form a Moblin. I definitely want to try out the horses-automatically-avoiding-trees thing, or get a look at and use some new items if possible. I don’t have a lot of desires for these demos, I’m hoping for anything new so whatever those lucky E3 goers get will be just fine with me. As long as it gets me hyped for this game, I’m perfectly alright with that.

Aside from getting a proper title for the next addition to the franchise, I would really like to see a complete trailer and demo. I’m talking full on music, story, and action that befits the Zelda series! The game has been in production for long enough that this is definitely not too much to ask for. As far as what I want to see from the demo itself, I want to see something that gives us a true feel for the “open world” that this game is supposed to exist in, a little tidbit of the story we can expect as well as a few of the characters that will be filling our screens in the future. I realize that they won’t want to give too much away so early, since the title won’t release until next year but I really think us Zelda fans deserve at least that!

More than anything else, I want to get a sense of Nintendo’s ambition with this game. Considering that it’s the company’s lone title at this year’s show, Nintendo has got to show us more than what we’re used to seeing. With exploration across a vast overworld supposedly being a focus for the new game, I want to see that element in action. I hope we get a better sense of the story, too. I mean, we don’t need too many details — the game is still at least 10 months away — but I’d love to know what direction Nintendo’s going in. Where does Link come from this time around? Where is the game’s placement in the overall Zelda timeline? Oh, and please, give us a title for this thing!