Zelda Dungeon Talks: Should There Be More Zelda Spinoffs Or Should Nintendo Focus On The Main Series? 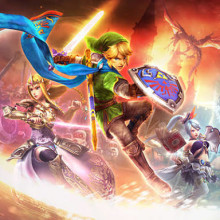 Hey everybody and welcome to the latest edition of Zelda Dungeon Talks! The Legend Of Zelda is a strong franchise with a large amount of main series games, as well as a few spinoffs here and there. Most people believed that Triforce Heroes would be a spinoff until it was confirmed as canon. That leaves us with Hyrule Warriors as Nintendo’s latest Zelda spinoff. Koei Tecmo and Nintendo collaborated to make an excellent game which is now coming to 3DS as well in Hyrule Warriors Legends. This game is a prime example of what a good spinoff is, so should Nintendo give us a few more spinoff titles? Or are main series games the way to go?

In this week’s edition of Zelda Dungeon Talks, various staff members will share with us their opinion on the topic. If your interested in having a response featured next week send and email over to zeldadungeontalks@gmail.com and we will send you the topic.

I like the idea of spin-offs. They let Nintendo give their developers, and even 3rd party developers, a chance to run wild with new ideas and mechanics, while staying faithful to an existing series, or multiple series if they are doing a crossover. Tingle’s Rosy Rupeeland and Hyrule Warriors are examples of games that can be a lot of fun, and can be fuel for thought among the developers when they are looking for new ideas for what they can do with the main series. There are certainly some elements of Hyrule Warriors that I would love to see in future Zelda games, after all. That being said, I would always prefer that Nintendo put the most focus on one Zelda game at a time, as that let’s them release new titles the most efficiently, It also keeps me from having to think about whether they are outright distracting us from the development of the next main series game, like I am these days. Still, I welcome more spin-offs. if one turned out bad, it would be upsetting, and people would gripe, but after a while, people would realize that it is not a main series title, but rather it was meant to experiment with new concepts, and they could then go on to try even more new things with future spin-offs. That is what Nintendo is all about, after all. Trying new things and innovating!

While I am not against spinoffs by definition, I do believe that a focus on the main line games would be great for the series. It is interesting to note that not all fans agree on what the “main” series is. Some consider all the games, including the less conventional Tri Force Heroes and Four Swords (Adventures). Others only focus on the 3D games, despite the series’ origin in 2D. There is a balance to find here: the elaborate and massive 3D games on the mainline consoles that stick to the conventions of the 3D games, 2D games with perhaps more of a gimmick on the handhelds and the occasional spinoff on the consoles and maybe handhelds too done by other teams.

There might have been a time when I would have always preferred main series entries over spinoffs but I have changed my mind on that now. These days I like the other ideas they have with the series such as Triforce Heroes, Minish Cap, or Four Swords. I especially like playing as characters other than Link and entries like Hyrule Warriors was perfect. I definitely want to see some more games in Hyrule outside of the standard Link fights Ganon to rescue Zelda. I don’t mind some of that on occasion but now I want to see more and play as someone else. I still want my Sheikah game some day.

Although I prefer games that follow along the main storyline I am not necessarily opposed to spinoff titles, especially if they are done really well. I would really like to see Nintendo give us a main story game that really digs in deep with the main characters, providing a much richer attention to detail and backstory, but at the same time I wouldn’t mind seeing more titles released that give us a better understanding of the different races that inhabit the world of Zelda. I second the notion from James for a game based on the Sheikah! Spinoffs are completely acceptable when done really well, for example I found myself enjoying the Minish Cap and Hyrule Warriors just as much as I did some of the main games in the franchise, and I am seriously looking forward to Hyrule Warriors Legends!