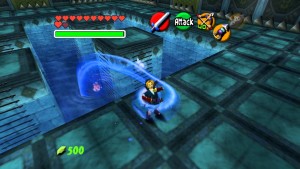 Ocarina of Time was of course the very first 3D Zelda title, so naturally, everything that the previous games did so well had to be translated to the 3rd dimension. This included Zelda’s iconic boss battles, and the Nintendo 64 classic proved that even in 3D, the giant monsters towering over Link were just as fun to fight. This week, we are going over our absolute favorites of all of Ocarina of Time‘s bosses, and mini-bosses, too. As usual, feel free to leave your own Top 5 lists in the comments!

Ocarina of Time has a great amount of variety when it comes to it’s bosses. There are plenty of dungeons to choose from and including the child dungeons and some of the mini bosses, Ocarina of Time allows for some very memorable boss battles. Bongo Bongo is the most memorable fight for me because the Shadow Temple was the first dungeon I ever completed in Ocarina of Time with a friend when the game came out. Nintendo has a long history with characters that have two giant hands and a giant head/body. Here’s looking at you Andross and Wam Bam Rock. Ganon takes number two on the list because this is the most memorable Ganon fight in the series for me. It has every memorable moment, the exploitable weakness in Ganon’s tail, losing your sword only to regain it, and delivering the finishing blow in epic fashion. Dark Link is another one worth mentioning because of his sheer toughness if you don’t know his patterns. Once you’ve figured out his weaknesses there are a few ways you can take him down. Having an enemy that mimics your every move is something that I want to see in a new Zelda title. Even though Dark Link is a mini boss battle within the Water Temple, the fight is definitely unique enough to warrant it’s own place in the Ocarina of Time bosses.

Twinrova was likely one of the most creative bosses in the series. The clever use of the mirror shield throughout the dungeon was impressive, but in the actual boss fight – the first phase, especially – it really felt like its use was dynamic and fun. Also, the fact that the witches themselves were intelligent and characterized, unlike many of the other series bosses, so hearing their dialogue was entertaining, and a pleasant change of pace. And the fact that their are bitter old ladies that banter at each other every other day makes it all the more fun.

There were a lot of memorable bosses in Ocarina of Time! I found Twinrova most memorable because of the music that accompanied her battle, and the banter between Kotake and Koume that followed shortly after. I also loved the character design of her second form and enjoyed using the Mirror Shield in-battle. Other than that, I like the way Volvagia and the Flare Dancer move during their battles– their fluid motions give them a sense of grace. Dark Link’s battle was spooky and exciting for obvious reasons, and the Iron Knuckle’s fight certainly got my heart rate up (stressful stuff).

Volvagia gets on this list purely on his dragon cred. He’s a dragon, and fighting dragons is awesome. Dead Hand makes the list on his creepiness factor and how satisfying it is to put that creep six feet more under, but loses points for appearing twice. Barinade is what a boss must feel like: a big monster fought in an even bigger room, has several phases, has large attacks and you need to use both skill and the dungeon item to bring it down. Plus, Barinade is the final obstacle to obtain all three Spiritual Stones needed to obtain the Master Sword. Iron Knuckles are big, tough enemies that are amongst the most formidable opponents in the game, and fighting them the intended way is quite the fight… unless you break out the Bombchus of course. But the big man himself, Dark Link, is the master. He appears without warning in a bizarre room, fights just like you and can counter many of your moves. Fighting him was a thrill, and after beating him and see the room change you still have no idea as to what had just happened. And that makes for a truly amazing boss fight.