ZD Top 5 – Dungeons & Palaces in A Link to the Past

Posted on February 11 2016 by Alexis Anderson 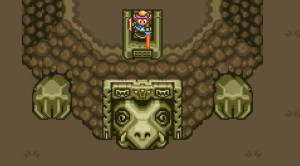 A Link to the Past established many of the Zelda series’ staples and stabilized the gameplay style we’ve now seen time and time again in its progeny. Having been remade, ported, and given a spiritual successor in A Link Between Worlds, A Link to the Past remains a fan favorite among longtime Zelda players. One of the greatest things about the game is its diverse and challenging set of dungeons and palaces. Each one has a personality all its own, and for their time these dungeons were very inventive in terms of gameplay.

In honor of the wonderful dungeons and palaces A Link to the Past has to offer, the ZD staff has ranked their top 5 favorites– feel free to share your lists as well in the comments!

Okay, so this one is only in the Game Boy Advance version, but hey. It holds a special place in my heart. As a kid, this place taunted me, never opening, because I had no one around to help me beat Four Swords (which unlocks the Palace). One day, I found a video on YouTube, which was pretty new to me, on how to glitch your way in via wall clips. I was blown away by that kind of thing. Once I got into the palace, though it was a bit glitched out in spots, it was awesome. Beefed-up versions of past bosses, sweet new puzzles, and best of all, one of my favorite bosses ever – one that leads to a whole new credits sequence! The four Dark Links were a great challenge that got harder harder and harder, and were honestly a better fight than Ganon, but that’s just me. I’d revisit this place any day, and I would always feel nostalgia at the simple action of still having to glitch my way in.

If I’m being totally honest, I don’t remember much of anything about Misery Mire. I do know that I liked the way the outside of it looked, and it was probably fulfilling finding the way to access the temple, but really I just love its name. It literally only sticks out to me because when I hear Zelda fans talk about Misery Mire it rolls off the tongue so easily in this poppy rhythmic way. Other than that, I can just vaguely remember the rest of the temples on this list being fun to play through, especially Thieves’ Town because I love the concept of the Village of Outcasts and I associate the two with each other.

While Turtle Rock is not always fun to navigate, it does have the feel of a penultimate dungeon that tests your mettle, skill and how you can apply your items. The fun thing is that you can have this one be the first dungeon that you actually clear if you have the items from several other dungeons, making Zelda the first maiden you rescue. This is immediately made funny by her claim that you can now attack Ganon’s tower because you have all seven maidens, whom you don’t have freed at that point. The Tower of Hera is a fun slog with its many floors, although the boss is one of the most annoying ones in the series. The Desert Palace is a fun mix of large and smaller rooms, several separate sections and fights that are just the right amount of tougher after the first dungeon. The Eastern Palace is a great first dungeon; a good mix of puzzles, fights and length that introduces the player to their first non-tutorial dungeon. Finally, the Palace of Darkness is the first dungeon in the dark world, and what a ride it is. New and deadlier enemies, a new item that you can actually use instead of an upgrade (the Magic Hammer vs the Power Glove and the Moon Pearl), new puzzles and environmental hazards and the finale in the shape of one of the most imposing boss battles in the game. And that’s why I like the Palace of Darkness so much: it is an introduction to what you’ll face in the second half of the game designed to both test and teach you.

Comments
Sorted Under: A Link to the Past
Tagged With: ALTTP, Dungeons, Palaces, Staff Opinions