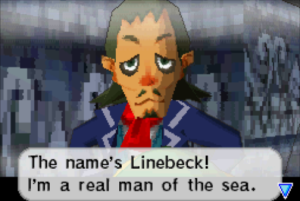 For this week’s ZD Top 5, we asked staff members an open-ended question: Who are your Top 5 comic relief characters in the Zelda series? These characters could either be central to the main plot of the game (spoiler, Link himself was chosen in one case!) or have no apparent relevance to the main plot (for instance, Tingle). What resulted from the posed question was a collection of characters and moments that provided levity and occasional laugh-out-loud humor in otherwise serious quests to save the world.

Which characters got you laughing? Which were most memorable for the humor they brought to the games? Add your own voices in the comments.

I’ve given a lot of flack to Phantom Hourglass in the past, but while the game itself is my least favorite in the series, I remember always being impressed with the development, and of course the hilarity, of Linebeck. And I went into the game thinking he was going to be a cool sea captain. It was before my more active internet days. The first time you meet him, he shakes the sense out of Link and proves to be a wimpy jerk, but you quickly learn to love his oafish lack of a spine. While continuously warming up to Link and even Tetra, he remains a reliable form of laughter. Yeah, he’s quite unhelpful, but to me, he may just be the best part of the game.

Okay, so maybe the Postman isn’t supposed to be for comedic relief, but I’m kind of convinced that he is. I mean, who runs and makes noises like that? I adore Groose. He has a very significant character development in Skyward Sword, but he’s also very comical in his I-may-act-like-a-total-jerk-but-I’m-actually-a-big-softy kind of way. And you can’t tell me that Toon Link doesn’t count as a comedic relief character. If you’ve played The Wind Waker, then you know that Link has his moments, and I laugh every time.

Nobody does comic relief like that rupee-hungry, middle-aged, map-making fairy man, Tingle. But Niko was just too pathetic not to laugh at, and Linebeck too much of a trainwreck. Groose was so in love with himself and Peatrice was so in love with Link that I couldn’t help but chuckle at their dramatics. Some of my honorable mentions that deserve comedic credit are Beedle, ???, Postman, Jolene, and Scrapper.

Though I feel that Linebeck fudges the line between comic relief and a serious character, his dialogue was simply too well-written to deny. Generally, Zelda games don’t get much out of me beyond a few chuckles, but Linebeck had me genuinely laughing at a number of points throughout the playthrough and, when judging characters by their comedic merit, that’s all that counts.

This was a tough call for me. There are moments in which some of these characters have a serious side, but ultimately the humor they bring is undeniable; anytime I find myself giggling aloud like a child, that is comic relief to me! My first two choices were the most difficult:  as I have said before, I really enjoyed the way that Ravio’s character was portrayed, and his adorable, flat-out laziness was too cute to handle. But Ezlo had an occasional cynical side that came across to me as absolutely hilarious; for that, he almost landed the top spot, but ultimately Ravio had to be the winner.