Difference between revisions of "Zora Armor" 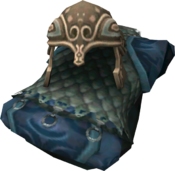 The Zora Armor is an outfit that appears in Twilight Princess and Breath of the Wild.

The Zora Armor is given to Link by Queen Rutela after he takes her son, Prince Ralis, to Kakariko Village. It was crafted by King Zora before his death and left in his grave awaiting the Hero. The armor, when equipped, allows Link to swim and breathe underwater like a Zora. However, it makes him more vulnerable to fire and ice attacks.

"Custom armor painstakingly crafted by each generation's Zora princess for her future husband. Wearing it will you you the ability to swim up waterfalls."

Link obtains the Zora Armor as a gift from King Dorephan in order to help stop Divine Beast Vah Ruta. It gives Link the ability to swim up waterfalls at breakneck pace, enabling him to stop Vah Ruta and enter the Divine Beast itself. It's stated that Mipha personally made the armor for Link as a token of her love for him.[1]

It has a base defense of 3, can be enhanced and dyed, and comes with the additional effects of increased swim speed and the ability to swim up waterfalls.

The Zora Set (also including Zora Helm and Zora Greaves) significantly reduces the stamina cost of dashing in water when all equipped pieces have been enhanced at least twice.

Zora Armor as it appears in Breath of the Wild.

Enhancing Armor requires that Link has unlocked as many Great Fairy Fountains as the desired star-level.