Zephos is one of the frog-like gods of wind in The Wind Waker. He is the one who teaches Link the first song in The Wind Waker, the Wind's Requiem. Link first encounters him on Dragon Roost Island, in the Wind Shrine, where two monuments of Zephos and Cyclos are located. After playing the Wind's Requiem (the song written on Zephos's monument), Zephos will appear and commend Link for playing the song. He also mentions that his brother, Cyclos, is angry about the fact that the stone monument holding his song has been broken, and that he has been stirring up cyclones and terrorizing the Great Sea recently because of it. This information is instrumental in getting another song on your quest, the Ballad of Gales. After that, he flies away. This is his only appearance. 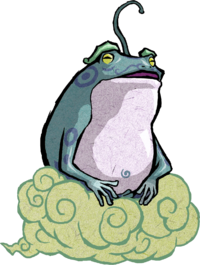