This article is about The Wizzrobe. For the The Adventure of Link enemy see, see Wizard.

The Wizzrobe is a common enemy seen throughout The Legend of Zelda series, having been around since the original The Legend of Zelda. Their appearance has changed between games, but their attack pattern stays the same. It will teleport around the room while casting magic at Link. 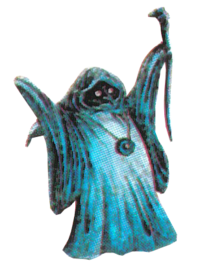 In The Legend of Zelda, Wizzrobes appear solely in dungeons. There are two color varieties, red and blue. Red Wizzrobes appear in front of Link and attack with a magic spell, whereas Blue Wizzrobes are less predictable, warping across rooms and rapidly firing their spells if Link is in their line of sight. Due to not reversing direction, the optimal approach to defeating a Blue Wizzrobe is to attack from behind. The Magical Shield may block Wizzrobe spells. Other than the sword, only bombs can damage Wizzrobes.

Wizzrobes are first encountered within Misery Mire, the sixth dungeon found in the Dark World. These enemies appear in a very similar fashion as they had in the previous two Zelda titles. They will appear, shoot a beam toward Link, and then fade away. After a few moments, they will appear once again. Each time they appear, they will face the direction that is closest to where Link is.

The beams that Wizzrobes shoot out can be quite dangerous as even if Link has the Blue Mail, the beams will still do two full hearts of damage. Fortunately, these Wizzrobes are not too difficult as a single slash from the Master Sword will defeat them.

A Purple variant of the Wizzrobe can be found deep within Ganon's Tower. Despite its Purple robe and skull face, this Wizzrobe is identical to the standard Wizzrobe. At this point in the game, Link can also use the Cane of Somaria to defeat multiple Wizzrobes at a time by causing the block to burst.

Wizzrobes in Link's Awakening bear a striking resemblance to their A Link to the Past counterparts. As in The Adventure of Link, the sword does no damage against them. Link must utilize bombs or arrows to exterminate the vermin.

The Wizzrobe, misspelled Wizrobe in-game, makes its first 3D appearance in Majora's Mask. Its appearance is significantly different from previous Wizzrobes. Unlike its predecessors, the Wizzrobe is encountered as a Mini-Boss instead of an enemy. Link encounters the Wizzrobe five times during his quest to save Termina.

Link first encounters two Wizzrobes in Snowhead Temple as the guardian of the Fire Arrows and the Boss Key. As one of the three Mini-Bosses in the Ancient Castle of Ikana, Link once again fights a Wizzrobe. This time, however, once defeated, Link is not rewarded with anything. Link also encounters the Wizzrobe in Stone Tower Temple and the Secret Shrine.

The Wizzrobes in Snowhead Temple and the Secret Shrine use ice magic to attack Link. This will freeze Link and the floor. Even if Link avoids the actual ice, he could potentially be frozen by the ring of frost that forms from his magic. However, the Wizzrobes in Ikana Castle and Stone Tower Temple use fire magic that will bursts into several smaller fireballs and will also take more damage to defeat.

The Wizzrobe will teleport itself through the four pads which are located throughout the room. If Link gets too close to the Wizzrobe as it is appearing, it will teleport to another pad. It will try to attack Link by shooting out ice or fire. Once it has warped, Link should attack the Wizzrobe by using the Sword, Bow, Bombs, Blast Mask, or becoming Goron Link before it has a chance to attack him. Once Link has done enough damage to the Wizzrobe, it will split in four, meaning three of the four Wizzrobes are illusionary copies. Now, the real Wizzrobe will not teleport away if Link gets to close to it while still appearing, making the battle easier for Link. Link can use the map to detect which Wizzrobe is the real one or simply look at each Wizzrobe; the real one looks less like an illusion than the rest.

Once Link obtains the Mirror Shield, he can reflect the Wizzrobe's magic spells back at it. However, it is not too useful due to the Wizzrobe disappearing quickly, but the spell has to be reflected close to the Wizzrobe.

There are several types of Wizzrobes present in the Oracle duo. Green Wizzrobes are immobile and attack from beneath their hats. Red Wizzrobes remain facing Link and are very erratic in their behavior, incessantly teleporting across the screen. Blue Wizzrobes assume transparency and pass through obstacles. Unlike their Link's Awakening counterparts, Wizzrobes may be defeated with the sword.

Wizzrobes in The Wind Waker resemble toucans and emit screeching noises when Link approaches. They are more intelligent than previous counterparts. The first encounter with this foe occurs in the Tower of the Gods. They also populate the Wind Temple, Hidden Holes, towers scattered across the Great Sea, and the Savage Labyrinth.

There are three varieties of Wizzrobe present in the game. Regular Wizzrobes shoot fire in three direction. Blue Wizzrobes behave in much the same way but done a blue tunic instead and are located solely in the Great Sea, Wizzrobes' first appearance in the Overworld. Yellow Wizzrobes are able to summon enemies. They have twice as much health as other variants.

The Red Wizzrobe is the Mini-Boss of the Wind Temple. It may summon Yellow Wizzrobes as well as Darknuts and Moblins.

In The Minish Cap, there are three types of Wizzrobe (Normal Wizzrobe, Ice Wizzrobe and Fire Wizzrobe). They are similar to their Four Swords and Four Swords Adventures counterparts. A strike with the Flame Lantern eradicates them instantly.

After a long absence, the Wizzrobe appears again in A Link Between Worlds. They are found in numerous of the late game dungeons, and are as challenging as ever.

There are 6 types of Wizzrobe to be encountered in Breath of the Wild, The Fire, Ice and Electric Wizzrobes, along with their more powerful versions: the Meteo Wizzrobe, the Blizzrobe and the Thunder Wizzrobe.

Wizzrobes in Breath of the Wild are disturbingly jovial creatures that spend most of their time prancing mid-air around ruins (it's implied that they created said ruins and killed all inhabitants in them). They salute Link when he's spotted, and giggle childishly while attacking. They disappear from time to time, just showing their prancing steps in the air while they move.

The most effective method to defeat them if no counter weapons are available is to use Stasis to prevent them from disappearing, stunning them with arrows to the head, and then attacking them when they drop to the ground.

Wizzrobes, unlike most other enemies in the game (except Cursed Bokoblins, Cursed Lizalfos, Cursed Moblins and Malice), drop no loot when slain other than their weapons, and sublimate into thin air.

Bokoblins in some encampments have been shown to use rods, and the Blights may sport non-recoverable variations of them. Some of these weapons may also be found in select treasure chests across Hyrule (only a handful or less per weapon in the whole map).

Wizzrobes in Age of Calamity largely have the same moveset as in Breath of the Wild, but can attack more frequently and are more resilient. As most other elemental enemies in the game, they're susceptible to rods and Runes that are contrary to their elements, making their special attack meter be more vulnerable and easier to break.

Wizzrobes initially drop their rods when defeated, but they later drop elemental items to replenish said rods. A caveat to their resilience is the fact that their hitboxes are larger than in Breath of the Wild, which means that it's not absolutely necessary to reach their floating altitude to hit them.

A swordsman's battle with Wizzrobe is one of the many Dead Man's Volley fights that are reoccurring throughout the Zelda series. Wizzrobe will toss a ball in Link's direction and Link will need to slash his sword to hit the ball back. Wizzrobe will then hit the ball back toward Link, with this pattern repeating several times. Each time Wizzrobe hits the ball back, the speed at which it reaches Link will change, sometimes coming extremely fast, while other times come at a very slow rate. A standard Wizzrobe will need four hits to be defeated, while its stronger armored variety will take six hits to defeat.

Wizzrobes conjure Keese to attack archers. The Wizzrobe usually flies around too fast to aim with much accuracy, but it is stunned for a few seconds after getting its magic reflected back at it by a swordsman, giving time for a charged shot or two.

Wizzro the Dark Wizard from Hyrule Warriors is likely based on the design and name of Wizzrobes.