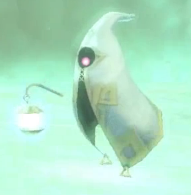 A Watcher is an enemy that is only found in a Silent Realm in the game Skyward Sword. They patrol the Silent Realm they are in, helping to protect it along with the Guardians. Watchers are only present when Guardians are inactive. They do not obey the Sacred Tears' rules, however, and regardless of how much time Link has left on his Spirit Flower they can still wake up the Guardians. They carry around lanterns, and if Link steps into the light, they scream and let the Guardians know that there is an intruder. There are two different types of watchers, but they are almost the same. Sky Watchers fly around the sky in fixed routes and will only alert the Guardians if you step into their light. Earth Watchers stay close to the ground and will chase you if they sense your presence near them, making you step in their light to alert you to the Guardians. They have a resemblance to Poes due to their ghost-like appearance and their lanterns, but also have a similar form to the Poe Collector in Ocarina of Time.