Difference between revisions of "Vire" 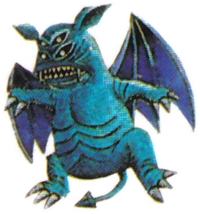 Vires are demon-like creatures that appear in The Legend of Zelda series.

Vires appear fairly early in the game. When hit, they split into two red-colored Keese, unless hit with the Magic Sword. They jump around the screen, but cannot cross water.

Vires are flying, red demons that are found only in Turtle Rock. These devils are able to fly off the edge of the screen and reappear on another side unlike any other enemy in the game, making them very evasive. Attacking Vires with the sword is extremely difficult, as they will quickly fly away when getting near them. The Fire Rod and Boomerang are the best weapons against Vires, since they defeat them in one hit. The Hookshot is a bit too slow for vires, but the Bow may be useful.

Oracle of Seasons/Oracle of Ages

The Vire can be found in Kobitan. The Vire wields a Boomerang as a weapon, and will toss it toward Princess Zelda. The Boomerang comes out rather quickly and can be somewhat difficult to avoid. Zelda must try to dodging the Boomerang, and get as close as possible to deliver a single sword slash which will defeat the Vire. Vire leaves behind a valuable blue ruby each time they are defeated.