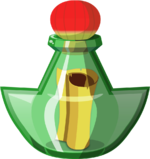 "You got a Tingle Bottle! Using Miiverse, you can insert a message you've written, and send it out to sea for someone unknown to receive!"

The Tingle Bottle is an item found in the HD remake of The Wind Waker. It replaces the Tingle Tuner, as the Wii U does not support Game Boy Advance connectivity, which the Tingle Tuner was a showcase for.

With the closure of Miiverse in November 2017, the Tingle Bottle now serves no purpose.