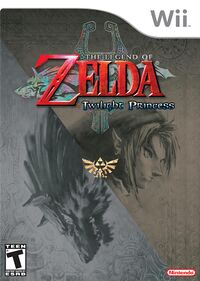 Link lives a peaceful life in Ordon Village as a goat herder and animal wrangler. He is a valuable friend to both the village and forest. One day Link is given the opportunity to visit Castle Town as an envoy to present a specially crafted sword to the royal family. Before Link embarks, however, tragedy strikes the village and he is forced to leave his tranquil life behind. Link must venture forth into the vast land of Hyrule to bring peace back to his village and, along the way, uncover the secret behind the mysterious Twilight.

There are ten Dungeons in Twilight Princess - nine are mandatory and one is optional. The dungeons, in order, are as follows: Template:MagicNavbox

Twilight Princess features its own set of support characters, most of whom live around either Hyrule Castle, Kakariko Village, or Ordon Village.

Barnes (39) A resident of Kakariko Village and owner of the bomb shop.

Falbi Is a former circus member. He's begun a small business awarding fabulous prizes for those who can grab a Cucco by the legs and pilot it to a small platform down on Lake Hylia,

Ilia (16) Daugther of Bo, the mayor of Ordon Village, and close friend of Link. She has a cheerful disposition, and is always gentle and kind.

Here is a listing of all of the enemies found within Twilight Princess.

Here is a listing of all of the items found within The Legend of Zelda: Twilight Princess.

Here is a listing of all of the locations found within The Legend of Zelda: Twilight Princess.