Difference between revisions of "The Legend of Zelda: Four Swords Adventures" 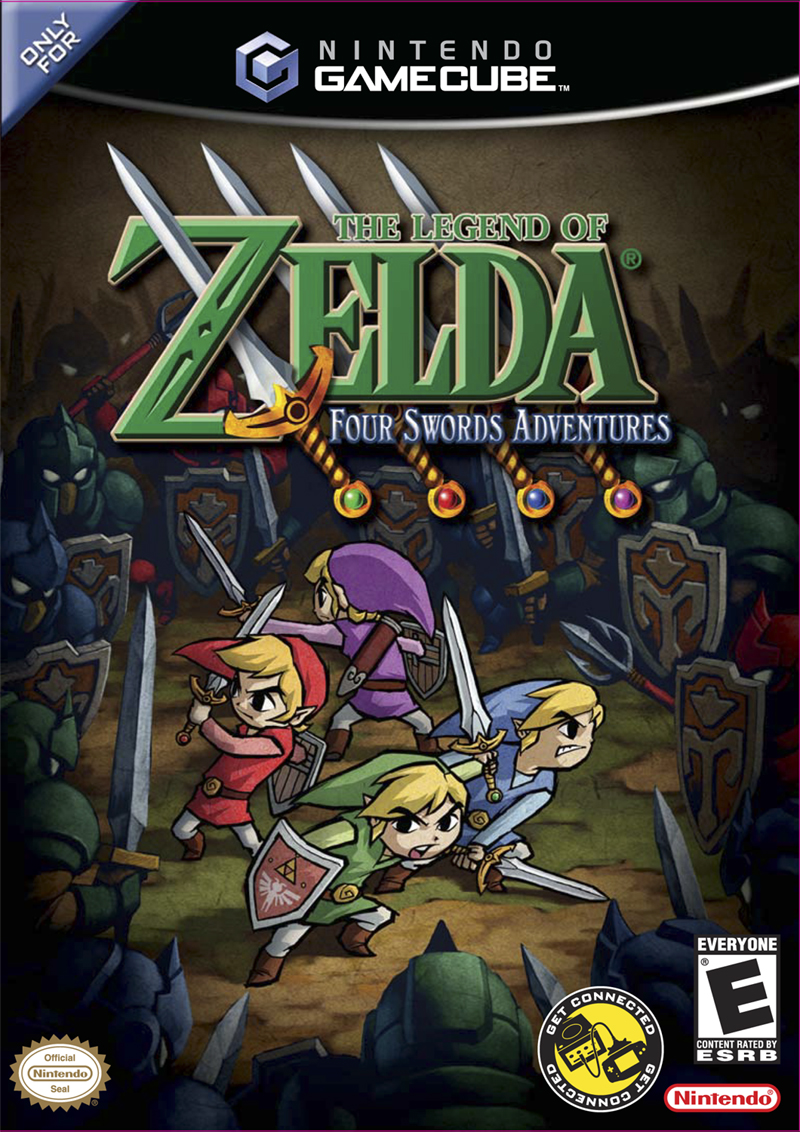 The Legend of Zelda: Four Swords Adventures is a game for the Nintendo GameCube. It was released on March 18th, 2004 in Japan, June 7th, 2004 in North America, January 7th, 2005 in Europe, and April 7th, 2005 in Australia. Four Swords Adventures is the tenth installment in The Legend of Zelda series. It is also the second game released on the GameCube.

Four Swords Adventures is unique for being one of only two games in the series to allow the player to control four separate Links at the same time. It is the second game in the Series to have multiplayer. Each player (excluding during one player mode) is required to use a Game Boy Advance and link cable to connect to the Nintendo GameCube. During one player mode, the player can use a Gameboy Advance, or just a Gamecube controller can be used and the Game Boy Advance screen will be displayed on on the main television. There are two separate ways to play Four Swords Adventures: Hyrulean Adventure and Shadow Battle. Hyrulean Adventure will take the player through the main storyline and can be played by one player or by up to four players. Shadow battle is a free-for-all multiplayer.

Along with using four different Links to complete the storyline, Four Swords Adventures changed many things in the typical Zelda formula. Each area of the game is separated into different levels. Levels do not connect with each other, and the player will have to leave the level to move to another area. Each level is then separated into three stages. Upon completing a stage, the player will then move to the next stage in the level. After completing the third stage and rescuing the Maiden trapped there, the player will then move to the next level. All levels are also able to be replayed as many times as needed, allowing the player to travel back and play through any stage or level they have completed.

Each level has three stages within it.

Level 1 – Whereabouts of the Wind

Level 4 – Near the Fields

Level 6 – The Desert of Doubt

Level 8 – Realm of the Heavens

The game's graphics style and music are directly based off of the graphics and music of A Link to the Past. The graphics received enhancements in the form of overlaid 3D effects, other advanced 2D effects such as ripples, and a fluid, dynamic camera that could zoom in and out of the 2D image. The music, for the most part, is untouched - most of the music was directly taken from A Link to the Past, with a few different MIDI instruments; the new music created for Four Swords Adventures uses the same instruments. However, the graphics displayed on the Game Boy Advance use the same style as Four Swords, whose graphics style is partly based off of that of The Wind Waker.