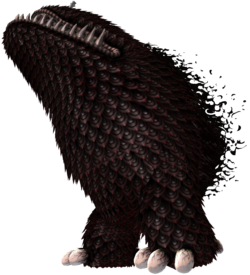 Zelda falling into The Imprisoned's mouth.

Standing at 50 feet tall, The Imprisoned is the first form of the final boss, Demise. It is a large, black, and hairy monster in Skyward Sword. It is imprisoned (hence the name) in the Sealed Grounds, located right outside Faron Woods. Link first sees this monster in his dreams, 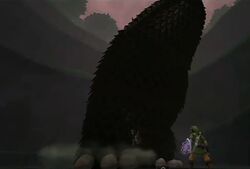 The Imprisoned standing before Link.

and this monster is the monster that eats Zelda.

After stepping through the Gate of Time, Link learns that when Demise was sealed, he lost his true form, and was turned into an abomination.

Link battles with The Imprisoned in the sealed grounds and several more times later in the game. Each time they meet, The Imprisoned has a slightly different appearance.

You first encounter occurs before learning of the Sacred Flames. The first battle it just has feet with four toes each. The trick is to get rid of all eight toes. After that, you have to do an uppercut slash with your sword to the sealing spike.

The third encounter occurs before you get the Song of the Hero section from Faron. The final battle The Imprisoned FLIES. Yes. Flies. Once you knock the sealing spike in once, it will start to fly towards the Sealed Temple. Three words. USE-THE-GROOSENATOR! If you hit it it will crash to the bottom of the pit. If you miss, well, you're screwed. After the second time you hit the sealing spike, Groose will be cut off from his supply of bombs. So you'll have to climb up Sealed Grounds and use the Groosenator to get on The Imprisoned's head. You then have to hit the sealing spike to finish it. If you miss, you're screwed, unless you're fast enough to get back to the Groosenator.