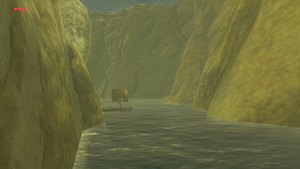 Tamio River is a location found in Breath of the Wild.

The Tami River is located just west and north of the Satori Mountain. The river will flows from the Regencia River westward, beyond the Jeddo Bridge. Water will continue to flow westward before the current dies down and the river ends near the Cliffs of Ruvara. While not that abundant, there are some Water Octoroks found at various points within the Tamio River. Despite it being a rather large body of water, there are very few fish found in the river, with just some Staminoka Bass found near the split from the Regencia River.

Immediately north of the Satori Mountain peak, there is a Raft along the river, allowing for navigation with a Korok Leaf. Just west of the Raft, there are a pair of treasure chests in the water containing five Shock Arrows and an Opal gem. On the sides of the river there are some Ore Deposits, including some Rare Ore Deposits. There are also some Rushrooms found on some of the steep cliffs.

At the west side of the river, Link will encounter some Blue Lizalfos in the water, near a small camp. There is also a Cooking Pot in the area, as well as numerous Cold Darners and Winterwing Butterflies. There are a pair of treasure chests here, one containing an Opal gem, and another an Amber gem. A third treasure chest can be found in the water containing a Silver Rupee. 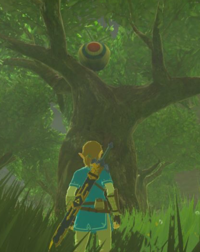 Shoot a balloon in a tree. 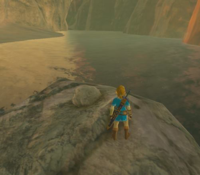 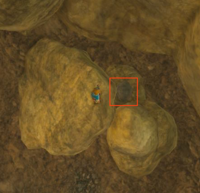