Difference between revisions of "Takashi Tezuka" 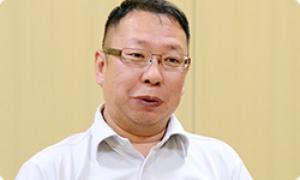 Takashi Tezuka at an edition of Iwata Asks

Takashi Tezuka is game developer who has worked on a number of Legend of Zelda titles. He was greatly involved with some of the early titles, working directly with Shigeru Miyamoto Video Game Designer at Nintendo

He was originally introduced to the video game industry by a friend and he has acknowledged that he had never even heard of Pac-Man prior to getting the job at Nintendo. In addition to the Zelda series, Tesuka has also worked on the Super Mario Bros, Yoshi, Pikmin, and Animal Crossing franchises.

Tezuka no longer directs games but instead serves as a general manager of various studios, alongside Shigeru Miyamoto.