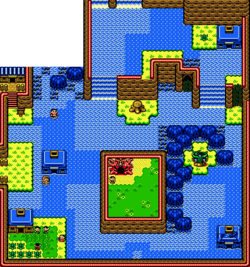 Sunken City is a location featured in Oracle of Seasons. Located at the east end of Holodrum, just north of the Woods of Winter. Link will need to travel through the Sunken City on his way to Mt. Cucco, where he will find the fourth dungeon of the game, the Dancing Dragon Dungeon. If Link has not acquired Dimitri's Flute, it is in the Sunken City where he will first meet Dimitri. Using his help, Link will acquire the Zora's Flippers within the city, allowing him to reach the mountain to the north.

When Onox kidnapped Din (Oracle), the Oracle of Seasons, he throws the seasons of Holodrum into chaos. Because of this, the snow on Goron Mountain all melted, and then the melted snow flooded Sunken City.

When Link first enters Sunken City, he finds Dimitri being harassed by three children, who call themselves the Safety Patrol. Once Link saves Dimitri, he is able to ride on him so that he can get over the deep water and swim up waterfalls. With Dimitri, Link can swim up the waterfalls to obtain the Master's Plaque, and to swim up another waterfall to return the Master Plaque to back to the Master Diver, and be rewarded with the Flippers. The Gale Seeds can be found on the east side of Sunken City.