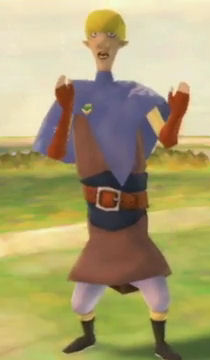 Strich is a character in Skyward Sword. He is the taller of Groose's two lackeys, constantly standing beside him or flanking him. Motivations for sticking by Groose, and other aspects of his character are a mystery. It could be that Strich is a quieter, calmer individual than Groose or Cawlin. Stritch is also a very serious bug-maniac. He can be found in the Lumpy Pumpkin on the second level where he expresses his love for these creepy-crawlies. If Link visits his room at night, Strich will enthusiastically purchase bugs from Link for a reasonable price. Strangely enough, he is away from his bully friends. When there, he acts somewhat kind towards Link, suggesting that maybe he is not the real meanie that a lot of people in Skyloft think he is.