Stalizalfos are enemies which appear in Breath of the Wild and Age of Calamity. 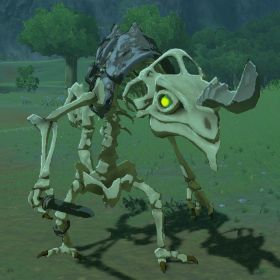 "The remains of Lizalfos appear in the dark of the night. They're as sly as ever, even now that they're just some bones stacked atop each other. However, their bodies are much more fragile, and a single solid hit can reduce them to pieces. If a skull remains intact, they will pull themselves back up and continue to fight. They've been known to grab the wrong skull at times, but they never seem to mind..."

These monsters only appear only at night, are just as quick as their living counterparts, and tend to swarm Link in groups of 2-3. Their weapons of choice typically include strong, Lizalfos-crafted weapons such as the Lizal Forked Boomerang or the Lizal Tri-Boomerang. They will collapse after a single hit, but their head will keep moving, requiring one final strike. If the head isn't defeated quick enough, it will re-assemble itself.

If Link wears the Lizalfos Mask or Majora's Mask, these enemies will no longer attack Link. Instead, they will follow behind in curiosity and will only attack if Link first attacks them. If Link has the complete Radiant Set and it has been upgraded to Level 2, he will gain the Stal disguise ability and it will display similar results as the above masks.

Stalizalfos in Age of Calamity are weaker enemies that are first encountered in the Freeing Korok Forest scenario. After a Stalizalfos is attacked, its head will separate from the rest of its body and it will begin to fly around, trying to attack a nearby warrior. Once they are defeated, they will occasionally drop a Lizalfos Horn or Lizalfos Talon. After each Stalizalfos is defeated, the player will receive a Lizalfos Trophy, which can be used to complete quests or upgrade weapons of the various warriors.