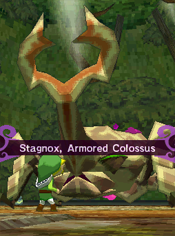 Intro to battle against Stagnox in Spirit Tracks

Stagnox, Armored Colossus is the Boss of the Forest Temple in Spirit Tracks. It is the first boss Link encounters in the game. Stagnox also appears later on in the game in the Take 'Em All On challenge mini-game.

The first phase of the battle is rather simple. Link will need to run around the outer edge of the circular platform that Link is standing on. At the same time being careful not to get too close, which will cause the boss to attack Link. Stagnox will slowly turn as well, but will eventually stop to try to attack Link. It uses an incredibly slow horn thrust that looks quite impressive, but it is extremely easy to avoid. When Stagnox misses its attack, quick run to its backside and pull out the Whirlwind. Target the purple fog and send a gust out of the whirlwind, which will stun Stagnox and leave its backside vulnerable. Run up and slash at its backside repeatedly until it gets back up on its feet.

Eventually, Stagnox will give up on this failed strategy and will then use its wings to fly up in the air. Stagnox will summon three blastworms and toss them down to the battle platform. Slash at these three slugs to turn them into spiked balls. After a few moments, Stagnox will try to hit Link with a flying thrust as it drops down closer to the platform. Stand below a spiked ball and when Stagnox is coming toward Link, use the whirlwind to send the blastworm right in the boss's face. The explosion will stun Stagnox and leave his backside vulnerable yet again, allowing Link to run over and slash away at its purple spot. Repeat this same process until Stagnox has been defeated.