Difference between revisions of "Squabble River"

The Squabble River is a long snaking tributary which is connected to the Hylia River, and further down, the Fir River. It travels past the Dueling Peaks Tower, the Dueling Peaks itself, and the Dueling Peaks Stable. Many Bokoblin Camps are situated on the riverbanks, which can prove dangerous at an early stage of the game. 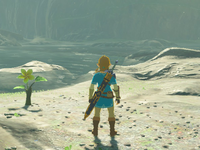 Start at the south side of the river, and follow the flowers. Cryonis Rune recommended!

The first flower in this path can be found on the south side of the river, and the path crosses the river to the north. Use the Cryonis Rune to cross so the current doesn't sweep you away. 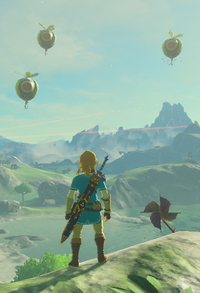 Climb up to the pinwheel and then shoot the balloons with your bow. 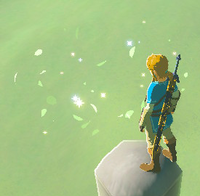 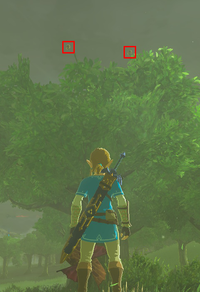 Stand on the stump and look at the large tree behind it. You will see two targets being tossed up behind the tree. Aim carefully and you can hit them with arrows.

This one is very tricky. Stand on the pinwheel stump and look behind you at the large tree. Look up and you will see two targets being tossed in the air. Aim and shoot them carefully with arrows. The best way to hit them is to aim at the top of their movement and shoot right as the target passes through the aiming indicator.

At the top of the hill to the west, roll a boulder down into the hole.

Roll a boulder into the hole. It can be found at the top of the hill to the west. 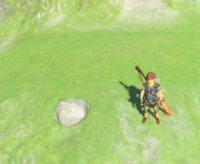 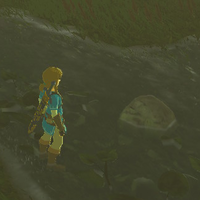 Blow up this wall, and lift the rock inside.

On the east side of the hill next to a small statue is a bombable wall. Inside, lift the rock.