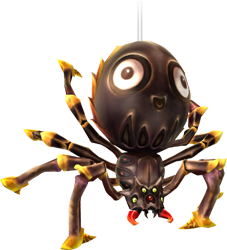 Skulltulas are recurring enemies in The Legend of Zelda series.