Difference between revisions of "Silent Princess"

This article is about the plant and material. For the Recovered Memory, see Silent Princess (Memory). 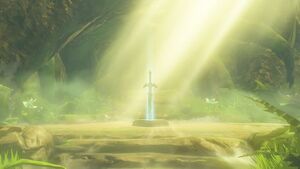 Silent Princess is a plant and material found in Breath of the Wild and Hyrule Warriors: Age of Calamity.

"This lovely flower was said to have been a favorite of the princess of Hyrule. Once feared to have gone extinct, it's recently been spotted growing in the wild."

Silent Princesss can be found occasionally in forested areas of Hyrule. Three in particular lie by the Master Sword's resting place in the Korok Forest. It is also commonly found on the hilltop behind the Ta'loh Naeg Shrine and surrounding the Great Fairy Cotera. It is the focal point of the Recovered Memory#9, where Princess Zelda examines one growing in the wild. This particular plant is used in the enhancing of the Champion's Tunic and the Stealth Set. They can be sold to shop-vendors all over Hyrule for 10 Rupees each. Silent Princesses can be used in a variety of Recipes, and they have an extra cooking effect of increased stealth.

Like most stealth-related ingredients and animals, Silent Princesses are bioluminescent, and thus easy to spot at night.

Silent Princesses also grow close to Great Fairies, except Malanya, who is a fairy-like deity.

Most notably, a sole Silent Princess can be found in Princess Zelda's Study at Hyrule Castle, it being the only living thing in the whole location that isn't a monster, a Guardian or is blighted with Malice.

A total of 44 Silent Princesses are needed for armor upgrades in the game, 34 for the base game and 10 for Amiibo-exclusive parts:

"This lovely flower is said to be a favorite of Princess Zelda. Once feared to have gone extinct, it can sometimes be spotted growing in the wild."