Difference between revisions of "Seggin" 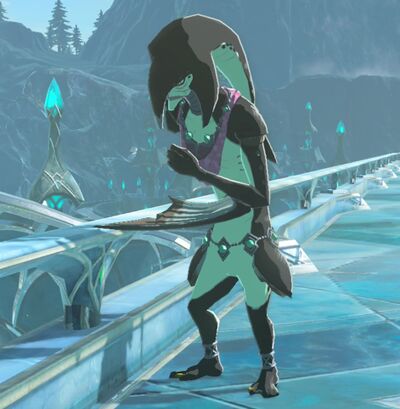 Seggin is a character in Breath of the Wild.

Seggin is an elder Zora, residing in Zora's Domain. He can be found standing on the higher level, right down the stairs from King Dorephan. He is trying to touch a Shock Arrow, to better understand the amount of pain it causes, as a way to prepare for a battle with the Divine Beast Vah Ruta. Seggin has tried to battle the Divine Beast before and used a shock arrow to attack it, which did weaken it. However, since Seggin is a Zora and is vulnerable, he couldn't strike it with enough electricity at once. This just slowed down the Divine Beast for a bit, but it was not enough to appease it.[1]

Link can appear and take Seggin's shock arrow. When Segging looks up and realizes it was Link, he threatens him, saying that he is going to avenge the loss of Mipha and strike down Link.[2] Since Link has lost his memory, he doesn't quite understand what Seggin is talking about. Seggin thinks that Link is playing dumb, and explains that it is Link's fault that he was not able to protect Mipha from Calamity Ganon.[3] However, once Link has taken Seggin's shock arrow, he views this as Link not taking on the responsibility of appeasing Vah Ruta.[4]

Seggin will then travel eastward, across the bridge towards the East Reservoir Lake. He tells Link that he's on his way to try to take on the Divine Beast all by himself and that Link should not try to stop him.[5] Link can either wish Seggin good luck, or warn him that it is too dangerous. If Link wishes him good luck, he will laugh at him, saying that was the last thing he wished to hear. However, Seggin does have a second thought and decides to call it a day.[6] If Link tells him it is too dangerous, he gets a but angry, stating that he use to strike fear into the hearts of demons, just by stepping on the battle field. Stopping the Divine Beast will be like taking a fish from a baby. However, he still has second thoughts and decides to call it a day.[7]

After Link has appeased the Divine Beast, Seggin will notice that it has stopped raining. He immediately thinks that it is Sidon's doing.[8] Each day after 10pm, Seggin will head to the back of Zora's Domain, where he will fall asleep in one of the small ponds. If Link talks to him during this time, he will say that it's time to go to sleep. The last thing he wants to do is fall in battle due to a lack of a sleep.[9] While sleeping in the small pond, Link can try to talk to Seggin, while he's sleeping. Link can hear Seggin mumbling in his sleep about how he's The Demon Sergeant.[10] He will wake up again at 6am, where he will head back across the bridge towards the East Reservoir Lake.