S. Tabantha Snowfield is a location in Breath of the Wild. 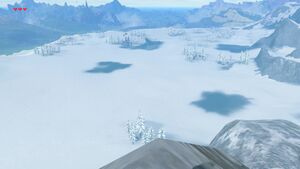 The South Tabantha Snowfield is the wide open and fairly flat area located just north of the Hebra Tower and all around the Snowfield Stable. The temperature of the snowfield is bitterly cold, where Link will need to wear some armor with Cold Resistance, such as the Snowquill Set, in order to survive.

There area has a variety of cold weather creatures, including some Cold-Footed Wolves, Tabantha Moose, White Pigeons, and a few Great-Horned Rhinoceroses. Likewise, the materials that Link find are found more commonly in colder climates, including Chillshrooms, Cool Safflina, and Wildberries.

There are some enemy Black Bokoblin found in the area riding on Horses. These Bokoblin are a bit dangerous as some of them wield Fire Arrows. Some Ice-Breath Lizalfos and Snow Octoroks can also be found. Some more dangerous Silver Bokoblin appear as well, which are significantly more powerful.

About halfway between the Hebra Tower and Snowfield Stable, just to the east of the path, there is a small group of a few trees. If Link uses Magnesis, he will see a treasure chest buried in the snow that contains five Shock Arrows.

The Rin Oyaa Shrine can be found within the S. Tabantha Snowfield in close proximity to the Snowfield Stable. The shrine requires Link to move metal blocks and block certain fans. Then Link can drop a ball and the existing fans will blow the ball around the room, eventually landing in the proper hole, allowing Link to reach the alter where Rin Oyaa awaits.

Under a rock behind some cracked boulders.

Under a rock under a pile of leaves.

Destroy the acorn in the hollow in the tree log.