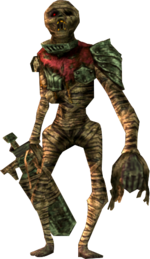 ReDead Knights have many significant differences than that of standard ReDeads. They are much larger than ReDeads in any other The Legend of Zelda game, as well as much creepier. Rather than attacking by jumping on Link's back, this variety screams at him, paralyzing him, making for an easy target with the Knight's sword. This attack deals one and a half hearts of damage in one shot. Link could attempt to run up and attack them one to one, but they will probably end up screaming again. A good strategy is to use the Clawshot to get close to them, and then immediately attack them before they have a chance to attack back or when they already screaming, immediately lock to them and rapidly press A (Gamecube) or shake the remote (wii) then perform Back Slice. Even easier, is to use a jump attack as Wolf Link. Later, once Link gets the Ball and Chain, two simple hits with that will finish off these zombies. Also, Bomb Arrows are effective as well.

They are found in the Arbiter's Grounds and the Cave of Ordeals.