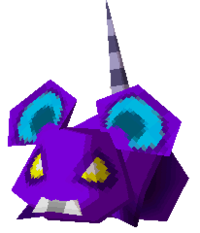 Rats are recurring enemies in The Legend of Zelda series. They are mindless, and thus will mostly run around randomly. They do not cause much damage and are more of a nuisance than a threat.

Rats make their debut in A Link to the Past, where they are very common enemies found early and often. They are easily defeated with one slash from Link's Sword.

The Rats of Link's Awakening are not enemies. Instead, they are taken care of as pets by Crazy Tracy and Syrup. Crazy Tracy owns two pet rats, which can be seen at her Health Spa. Syrup has only one at her hut. Link cannot interact with the rats in any way, but they roam around the room while he is there.

In The Wind Waker, Rats are first found in the Forsaken Fortress. They will jump and attack Link, but if he feeds them with All-Purpose Bait, they will start acting kind to him. Rats are also found in the Town Jail on Windfall Island.

In Four Swords Adventures, Rats cause Link to drop and lose his Force Gems upon contact. They look and act very similarly to Rats from A Link to the Past.

In Twilight Princess, Rats are a very common enemy that appear in various regions and dungeons. Their first appearance is in the cave in Faron Woods. They can most commonly be found in the Arbiter's Grounds. Rats in this game will initially leave Link alone, but once Link approaches them they may attack Link. They deal minimal damage and can easily be defeated with one slash from the Master Sword. In groups, however, they can be much more dangerous. Spin Attacks or Jump Strike are the best bet against groups.

A special kind of Rat also makes an appearance in Twilight Princess. These Rats are called Ghoul Rats. These critters can only be seen by Wolf Link if he is using his senses. Otherwise, they are invisible. Ghoul Rats will run away the room/area, and once Link comes near them, they will latch onto his skin. They will stay there, not dealing damage, just hanging on to Link. The more Ghoul Rats that attach to Link causes him to walk slower and slower. They can be knocked off by doing a Spin Attack as Wolf Link with his senses on.

Ghoul Rats are first seen in the Arbiter's Grounds, and later appear in the Cave of Ordeals and Hyrule Castle.

Rats in Phantom Hourglass are small, purple rodents that can be defeated with a single slash of either Oshus's Sword or Phantom Sword. They are non-aggressive, and will often run away from Link. Some rats also hold small keys and other items like them.

These pesky creatures are usually found in caves and dungeons that have small holes. They will run in and out of the holes, often with small keys dangling from their tails. There are occasionally puzzles in which Link needs to push a block in front of a hole to prevent the rat from entering or exiting a cave.

When the spirit of Princess Zelda takes control of a Phantom, she will still be afraid of these rats. If a rat runs near the phantom, the phantom will stop in its place and will not move until the rat runs away or Link defeats the rat.

Rats in A Link Between Worlds appear much like their predecessors in A Link to the Past. They appear mostly in caves and various dungeons, but can be defeated with relative ease.