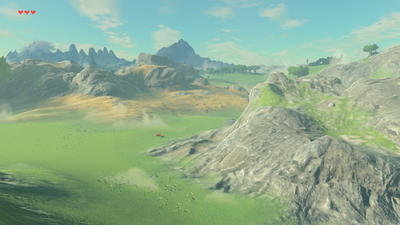 Quarry Ruins is a location found in Breath of the Wild.

The Quarry Ruins are located just southwest of Hyrule Castle. The area is quite dangerous as there are multiple Guardian Skywatchers patrolling the area, as well as a Guardian Stalker to the south.

At the east side of the ruins in the watchtower, there is a treasure chest at the bottom that holds five Bomb Arrows. A second treasure chest can be found on top of the guard walkway at the north end of the ruins. Remove the slab with Stasis and open the chest to get five Shock Arrows. Another chest can be found just east of the Katah Chuki Shrine, also on the guard walkway, with this one containing five Fire Arrows.

The Katah Chuki Shrine can be found at the southeast portion of the ruins. The shrine is A Minor Test of Strength shrine with a Guardian Scout II that wields a Guardian Spear. Open the chest in the shrine to get a Royal Halberd and then speak with Katah Chuki at the altar to get a Spirit Orb.

Climb up the deteriorated stone wall and look west toward the big tree. There is a balloon hidden within the branches that you can shoot down.

Complete the rock circle. The rock is in the direction of the gap in the circle, to the north.

Grab the nearby rock to complete the circle.