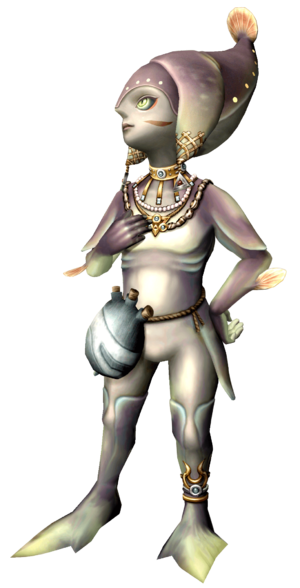 Prince Ralis is the son of the late ruler of the Zoras, Queen Rutela. When Zora's Domain was frozen over by the forces of Zant, Prince Ralis attempted to contact Princess Zelda at Hyrule Castle, however he was attacked. Rescued by Ilia, Ralis fell ill and was brought to Telma's Bar in Castle Town. Despite requiring emergency medical care, the town physician Dr. Borville, refuses to give him treatment under the excuse that he has no expertise in treating Zoras.

Eventually Link tracks down Ilia and discovers the condition of Prince Ralis. Telma requests the assistance of Link to help escort Prince Ralis to Kakariko Village where the town shamen Renado can treat him.

In time, the Prince fully recovers, however upon hearing the news of his mother's passing, Ralis loses self-confidence and does not consider himself fit for ruling the Zoras. Ralis spends his time outside the grave of his father through the secret alcove at the back of the Graveyard.

Later, Ralis presents Link with the Coral Earring, a hook which will allow Link to catch a Reekfish in Zora's Domain. Ralis eventually returns to Zora's Domain and is watched over by the spirit of his mother.