The Postman Statue is a Trading Sequence item in The Wind Waker. It is carried in the Delivery Bag and looks like a Rito carved into a statue.[1] 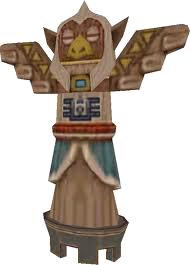 At first, the only way for Link to obtain a Postman Statue is to trade the Hero's Flag to the Traveling Merchant of Greatfish Isle.[2] He also tells Link to pay 100 Rupees.[3] However, after receiving the Shop Guru Statue, he can trade it to the other two merchants on Bomb Island and Mother and Child Isles to get another Postman Statue.[4][5] They, too, require 100 Rupees.[6]

Once it is in Link's possession, the Postman Statue can be traded to any of the three merchants for a new item. On Greatfish Isle and Bomb Island, the merchants only give him a Fountain Idol for 65 Rupees.[7][8][9][10] However, on Mother and Child Isles, he can obtain the Shop Guru Statue, the sequence's final item.[11] It costs 200 Rupees.[12]

After receiving the Postman Statue for the first time from the Greatfish Isle merchant, the merchant sends the item to Zunari's Shop.[13] There, Zunari sells the statue for 100 Rupees.[14] It can be purchased and placed in Joy Pedestals around Windfall Island.[1]