Difference between revisions of "Pols Voice" 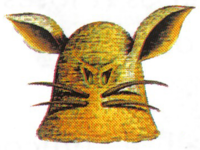 Pols Voice are a rabbit-like enemy that have appeared in The Legend of Zelda, Link's Awakening, Oracle of Ages, Oracle of Seasons, and Phantom Hourglass. Pols Voice ears are very sensitive to loud sound and you can use it as advantage to defeat them.

In The Legend of Zelda, these enemies are quite dangerous. They hop around the screen causing a large amount of damage anytime they touch Link. Their jumps could take them over blocks and water making them even more dangerous. The easiest way to defeat this enemy is by shooting an Arrow at them with the Bow. Pols Voice also could be destroyed with a sword slash, but it takes quite a few hits to defeat. Pols Voice are also highly affected by microphone input only in the Famicom release of the game.

They hop around the screen trying to attack Link by bashing into him. Unlike most enemies, the Pols Voice is invulnerable to your sword. The easiest way to defeat a Pols Voice is to play your Ocarina near them. Playing Ballad of the Wind Fish with your ocarina will instantly kill any Pols Voice on the screen. If you don't have the ocarina yet, they can be killed by shooting an arrow or throw something at them, such as a nearby pot or rock. Though your sword does not harm it, it will push the Pols Voice back allowing you a bit of time to grab something to throw at it. Bombs will also harm the Pols Voice, but it may be hard to time your hits using them.

Like the previous games, they hop around the room that they inhabit in an attempt to bump into Link. They are fairly fast whenever they jump, so it's sometimes best to keep moving around the room whenever there are Pols Voice present. These enemies cannot be defeated by normal means. But, with one play of the Harp of Ages or your animal friend's Flute, you can defeat them easily. Alternatively, Bombs also work against a them.

Pols Voice are identical in appearance and behavior like their previous appearance in Oracle of Ages. It can be defeated by the Flute that you obtain from either Moosh, Ricky, or Dimitri.

The latest appearance of Pols Voice in the Zelda Series is in Phantom Hourglass. They look very much like the original concept art for the Pols Voice. There are only a few Pols Voices in this game. They are all found in the Temple of Courage, and must be defeated to progress through the temple. The trick to attacking it is first to blow into the mic. The Pols Voice will cover up it's large ears, allowing Link to whack it with his Sword. After defeated, it will drop a Small Key, and Link will be able to continue.