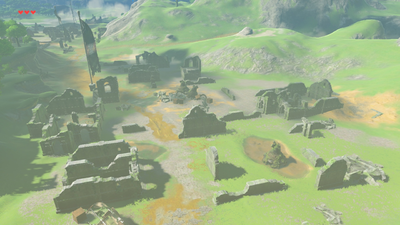 The Outpost Ruins are a location found in Breath of the Wild.

The ruins can be found in the Dueling Peaks region of Hyrule, located right on the path just east of the Great Plateau Tower. While walking along the road, there are massive flag polls on each side of the road near the entrance as Link walks eastward. The area is littered with inactive Decayed Guardians that Link can examine to find Ancient Materials.

Throughout the Ruins, rusted weapons and shields can be found sticking out of the ground and lying on the floor, including Rusty Halberds, Rusty Claymores, Rusty Shields, and a Rusty Broadsword. There is also a Wooden Bow right near the fountain.

At the south end of the ruins there is a metallic treasure chest that is stuck in the ground. Link can pull it out using Magnesis and open it to find an Amber gem.

Just southeast of the ruins, Link will will find a Stone Talus (Luminous), in the Lake Hylia North region of the Dueling Peaks.

As part of The Master Trials DLC, a journal can be found on the shelf at the southern most building of the Outpost Ruins. Misko's EX Journal can be found and it gives insight on many of the Side Quests that are part of the DLC, including the EX Treasure: Ancient Mask, EX Treasure: Fairy Clothes, EX Treasure: Twilight Relic, and EX Treasure: Phantasma. The journal talks about the eight priceless relics that Misko stole from Hyrule Castle and gives hints of their whereabouts.[1]

In a cave in this hill, count to 5 using the flowers.

At land level, you'll be able to walk inside this rock. Inside are 5 clumps of flowers, each with a different number of flowers. Walk near them in order of 1 through 5 to reveal the Korok.