Difference between revisions of "Navi Trackers" 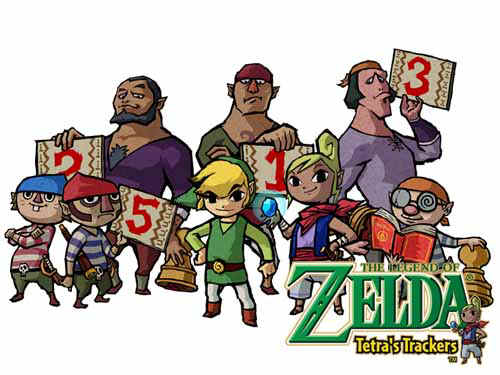 Navi Trackers is a puzzle-based treasure hunting game that was included in the Japanese and Korean versions of Four Swords Adventures. The game was formerly planned as a stand alone title named Tetra's Trackers, but it was turned into an optional mode of Four Swords Adventures somewhere along the line in development. Players use Game Boy Advances as game screens and controllers via a link cable, while the television screen shows navigators narrating the action and a basic map.

In this game, Tetra or other navigators serve as guides to Link as he searches the land for members of Tetra's pirate gang in a specific order to gain stamps from them. Link must collect as many stamps as possible within a given time limit. In the multi-player game, players must competed with each other to gain higher scores. In a single-player game, the player has the choice of playing against Tingle (Tingle Battle), or collecting the stamps alone within a given time limit (Time Attack).

When Tetra's Trackers was first announced at E3 2003, it was originally planned to be a stand-alone game release. However, Nintendo canceled the project as a standalone game without any official announcements. Later, the game was included in the Japanese and Korean version of Four Swords Adventures as the multiplayer mode Navi Trackers. Likely because of the difficulties in rerecording voice acting in other languages, the mode was not included in all releases of Four Swords Adventures outside of Asia.[1]

The story takes place right after The Wind Waker, where Link has to prove himself worthy of being a pirate in Tetra's "Pirate Test". Three other pirates are disguised as Link and battling with him in a little contest. Link must pass all 12 of Tetra's test to become a pirate.

"Tetra, the leader of the pirates, has put forth a challenge!"

Link must race his way through various settings, collecting stamps from Tetra's pirate cohorts. To rise to the challenge, he will have to use all his exploration and navigation skills. Accepting this hefty task, players search for pirates placed strategically around Pirate Island and receive a stamp from each one as proof that they actually found them. Pirates must be found in the correct order, so players rely upon map information and hints provided by Tetra through the fabled Pirate's Charm. Up to four players compete to see how many stamps they can collect before time runs out.

All the characters from this game are from The Legend of Zelda: The Wind Waker.