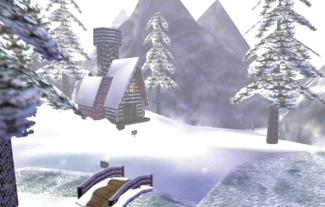 The Mountain Village is a location in Majora's Mask in the region of Snowhead which can be found in the northern section of Termina. The area may only be accessed once Link has obtained the Hero's Bow from the Woodfall Temple. With the Bow, Link can shoot down the icicles that block the path to the entrance to the village. The Village itself leads to several other areas, including Snowhead Temple to the east, the Twin Islands to the west while in the north lies a secret path up to the Goron Graveyard. The most notable location, however, is the Mountain Smithy which lies in the center.

When Link first enters this location he is greeted by the harsh winter conditions and the effects it has had on some of the Gorons, who in turn have been frozen. Upon first entering the Village Link can strike the Owl Statue to open up a warping point. First Link heads to the west, on to the Twin Islands, in which leads up to the Goron Village. After unveiling Darmani's spirit, Link must follow him back to the Mountain Village, whete he leads Link to a cliff. Link equips the Lens of Truth to uncover a hidden ladder leading him to the Goron Graveyard, where he obtains the Goron Mask.

After defeating Goht within Snowhead Temple, the winter subsides and spring returns to the region. With the snow gone Link can do a number of extra quests within the Village. He can upgrade his Kokiri Sword at the Mountain Smithy and now with the Goron Racetrack open, Link can obtain Gold Dust. This allows the young hero to forge the Razor Sword into the Gilded Sword. Link can also take part in conducting Don Gero's frog choir, if Link finds the other four frogs he can use the Don Gero's Mask here to obtain a Piece of Heart.