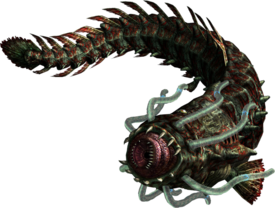 Morpheel is the boss of the Lakebed Temple in Twilight Princess. It is a giant sea serpent-like enemy, with rock hard scales and a gigantic body.

As you may have guessed, the eye you saw is Morpheel's weak spot in the first phase of the battle. It will move around through the various tentacles but can be z-targeted. Pull out the Clawshot and pull the eyeball out of the tentacle. With the Iron Boots also equipped, just slash at the eyeball and it will then return to Morpheel's body.

Try not to stand in a single place since Morpheel will use his tentacles to grab Link and then toss him into its mouth. He'll then spit you out, so immediately remove the Iron Boots and swim away, otherwise you'll fall right back into its mouth. Link can swing at Morpheel's tentacles when they try to grab him and they will retract. Morpheel will also toss Bombfish towards Link. Striking them with your Sword will activate the Bomb, so quickly swim away or toss them to the side.

Repeat the process of pulling the eye out and slashing it with your sword a few times until the first phase of the battle is complete.

Morpheel will then come out from underground and reveal its entire gigantic body. The weakspot is now the eye on top of its head. Un-equip the Iron Boots and swim after Morpheel. Once you are close enough z-target its eye. Use the Clawshot and it will bring Link onto its back. From there, just slash away with your Sword, repeatedly hitting its eye. After a few hits, Link will be tossed off of Morpheel's back.

Repeat the same process once again, chasing Morpheel around the room. Since Morpheel swims rather quickly, it's hard to chase after the eye, so try to intersect its path from other angles, sometimes even going head on in front of its mouth. Just be sure to claw on to its eye before it has a chance to suck you in.

The only attack Morpheel has at this stage of the battle is swallowing Link, so try not to get sucked in. After latching on three times and swinging at its eye, Morpheel will be defeated.

In the first phase, use the Iron Boots and Clawshot to pull the eye away from its tentacles. Slash at its eye repeatedly until it retreats back. Repeat this process until Morpheel comes out from under the ground. Target the eye that is on top of Morpheel's head. Use the Clawshot to pull yourself over and then slash away with your sword. Repeat this process several times until Morpheel has been defeated.