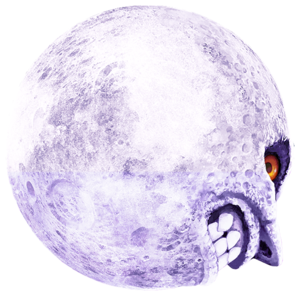 The Moon appears exclusively in Majora's Mask and plays a massive role in the game. In Majora's Mask, the people appear to revere the Moon as in some ancient religions.[1] Near the beginning of the game, Link is informed that the Moon will fall on Clock Town in three days due to Skull Kid's actions while under Majora's control.[2][3][4][5] This leaves link only seventy-two hours to save the world, or else it will fall, and destroy Termina. Once Link has awakened all Four Giants and played the Oath to Order on top of Clock Tower, they will come together to stop the Moon from falling. Link will then enter the Moon through his mouth.

Inside the Moon, there is a large, open field, with a tree. By the tree are four children, each with different masks. One with Odolwa's Remains, one with Goht's Remains, one with Gyorg's Remains, and one with Twinmold's Remains. There is also a lone fifth child with Majora's Mask on. If Link talks to the four children, they ask for masks. If Link gives them masks, they will play a mini-game with Link. Afterwards, they will ask for more masks. If Link does this with all four children, he will be left with only transformation masks. If Link speaks to the child wearing Majora's Mask following this, he will ask Link if he wants to play. He will then notice that Link has no masks left, and will give him the Fierce Deity's Mask. The battle with Majora will then commence inside a separate arena. After defeating Majora, the Moon dissipates, and Termina is saved.