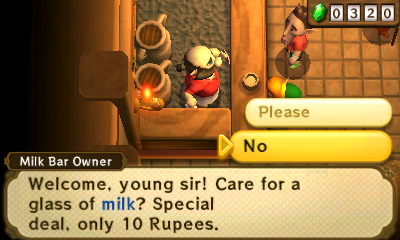 After Link finds the Bouldering Guy on Death Mountain, he tells Link that he is trapped and needs Premium Milk to return his strength.[1] Upon returning to the Milk Bar, the owner is initially surprised that Link knows about the premium milk, but he quickly realizes that Link is asking in the place of one of his customers.[2] He asks Link to take the premium milk to the trapped man, explaining that it will heal him.[3] The Milk Bar Owner also informs him that the Bouldering Guy is not only an adventurous fellow who claimed he was heading to the Tower of Hera, but also one of his regular customers whose business he can't afford to lose.[4] He is baffled that the Bouldering Guy pushes himself so far.[5]

Later, after Link delivers the premium milk, the Milk Bar Owner thanks him and tells Link he can now purchase milk for half price, since he is his new favorite customer.[6]