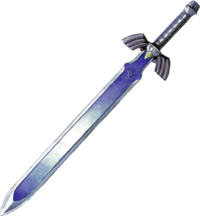 Skyward Sword explains the creation of the Master Sword. It was originally known as the Goddess Sword until it was powered up by Sacred Flames and blessed by The Goddess.