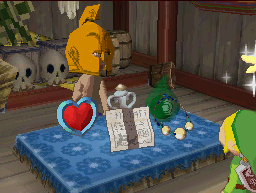 The Masked Beedle as he appears in Phantom Hourglass

In The Wind Waker, the Masked Beedle can be found at the Rock Spire Isle (Coordinate B3 on the Sea Chart).

Prices for Masked Beedle's Shop are as follows:

Each of the items above can only be purchased once. From then on, he will sell the following items: