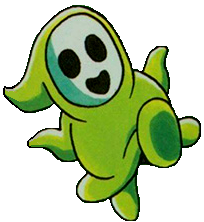 Mask-Mimics are enemies that appear in Link's Awakening.

Mask-Mimics are strange enemies that copy Link's movements in opposite directions, much like the Arm-Mimic.[1] A simple sword slash will do nothing but push this enemy back. Link's sword will only harm a Mask-Mimic if he uses a spin attack on it from behind. Alternatively, they can be defeated with arrows or bombs. Link can also pick up objects such as pots to throw at Mask-Mimics to take them out quickly. They can be found in Bottle Grotto and Face Shrine.