Difference between revisions of "Marin" 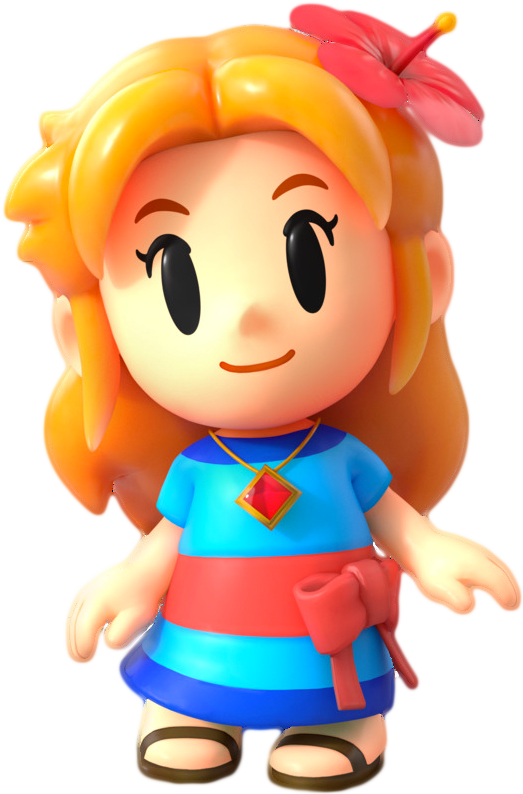 Marin is an important character who appears in the game Link's Awakening. She is the daughter of Tarin and lives in Mabe Village on Koholint Island. When Link washes up on the beach, Marin discovers him and brings him back to her house, taking care of him until he wakes up.[1] She is a girl with a mischievous side who likes to sing the Ballad of the Wind Fish and enjoys staring at the ocean.[2][3] Unlike the other inhabitants of Koholint, she dreams of seeing the world beyond their island.[4] In addition, the animals at Animal Village are very fond of her. They call her "Little Marin" and become very excited when she arrives, greeting her eagerly.[5][6] Any animal who hears her sing is instantly captivated by the song.[7] She also bears a striking resemblance to both Malon and Princess Zelda.[8][9]

When Link first arrives on Koholint, Marin finds him unconscious at Toronbo Shores and takes him back to Mabe Village. At first, Link mistakes Marin for Zelda.[10] Link heads back to the beach to retrieve his sword. When he returns, Marin is standing by the weathercock at the Flying Rooster's resting place. She explains that her father has gone into the Mysterious Woods to look for mushrooms, but she stayed behind to sing.[11]

The Ballad of the Wind Fish

Soon after obtaining the Pegasus Boots, Link can complete the Dream Shrine and receive the Ocarina. If he speaks with Marin while he has the ocarina, she asks him to accompany her as she sings.[12] Link then learns the Ballad of the Wind Fish, which is required to finish the game.

Once Link has completed Key Cavern, he tries to go to Yarna Desert to obtain the Angler Key. However, the path is blocked by a large sleeping Walrus. The people of Animal Village suggest that Link get Marin to sing for him, because the Walrus loves her music.[13]

Link finds Marin sitting on Toronbo Shores, one of her favorite places to visit, staring at the ocean.[14] She asks if he will sit next to her and talk.[15] If he agrees, she talks about how her father believes there is nothing beyond Koholint and how excited she was when she discovered Link.[16] She admits her secret wish to become a seagull so that she could fly away.[17] Afterward, she agrees to go to Animal Village to awaken the Walrus, talking a lot along their travels.[18][19] 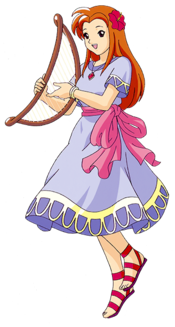 When they arrive at Animal Village, they head through it to the path with the Walrus in East of the Bay and Marin sings for him. The Walrus awakens with a start.[20] After that, one of the Rabbits from the village calls to Marin.[21] She decides to stay in Animal Village for a while.[22] The animals always enjoy hearing her sing, and she goes to the village often.[23]

While Link is traveling with Marin, there are a few events or pieces of dialogue that are permanently missable if not activated during this time.

Photograph of Link and Marin on Toronbo Shores

In the DX version of the game, the Photographer takes three different pictures of Link and Marin together. These photographs cannot be obtained after Link awakens the Walrus and Marin leaves him.

On his way to Turtle Rock after finishing Eagle's Tower, Link finds Marin trapped on a bridge in the Tal Tal Mountain Range, pleading for help and bemoaning her fear of heights.[44][45] She claims that monsters put her there.[46][47] Link can save her by using the Hookshot on the platform behind her.[48] Afterward, she is slightly surprised but she thanks him and begins to tell him something, but then Tarin shows up and calls for her.[49] The Owl then reveals that Marin had sung the ballad for the Wind Fish.[50]

Upon returning to Mabe Village, Link will find Marin near the weathercock again. After thanking him for everything he has done, she admits that she made a wish to the Wind Fish, but she refuses to tell him what it was.[51] She also says that she knows that he will leave someday, and she asks him to never forget her.[52]

Once Link awakens the Wind Fish, Koholint Island and everyone in it, including Marin, turn out to be a dream.[53] However, if the game is completed without a single death, in the end cutscene, Marin makes a special appearance. In the original game, she is seen flying across the screen with a pair of wings. In the DX version, her face briefly appears in the sky, before fading away into the outline of a seagull. This likely refers to the conversation that Link had with Marin on the beach, where she wished she could become a seagull to fly away from Koholint.

In Super Smash Bros. Melee, Marin is depicted as a trophy. It can be obtained by unlocking the Sound Test. The trophy's description reads this:

Marin is a young girl who cares for Link after a shipwreck washes him up on the shores of Koholint Island. She's a talented harpist, well liked for her kind and gentle nature. She holds fast to the ideals of truth and honor; if Link happens to steal something during his adventure, she greets him with a shout of "THIEF!"

Marin is a character in Hyrule Warriors. She is unlocked by purchasing the Link's Awakening DLC pack in Hyrule Warriors and Hyrule Warriors Legends,[54] or can be unlocked by completing square E-3 of the Koholint Island Map in Adventure Mode in Hyrule Warriors: Definitive Edition. She uses the water-element Bell as a weapon, which allows her to use music and waves of water to attack her enemies. In some of her combos and special attacks, she summons the Wind Fish, and she can be heard singing the Ballad of the Wind Fish when she leaves Focus Spirit early. She is weak to lightning-element damage.

Likely due to being a later DLC character, Marin has no additional costumes. When defeated, Marin drops the same materials as Zelda. The silver drop is Zelda's Brooch and the gold drop is Zelda's Tiara. 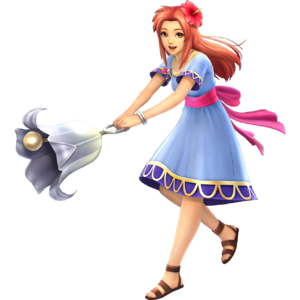 To complete all of Marin's badges in Hyrule Warriors: Definitive Edition, the player must collect the following materials:

Marin appears as a support spirit in Super Smash Bros. Ultimate. She is obtainable by fighting a spirit battle in the World of Light game mode. During the battle, the player must defeat Link and Zelda on the Tortimer Island stage. If the player touches the bottom floor, they will fall asleep. Once unlocked, Marin provides the "Irreversible Controls" ability, which makes the player immune to left-and-right control reversal.