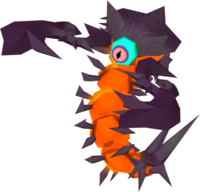 Magtails are enemies that appear in The Wind Waker. Magtail looks like an overgrown centipede and has one eye as its weak point. Its eye is guarded by its pincers, but it drops its guard momentarily when it is about to attack. During this short period, Link can do a parry attack to quickly defeat the Magtail. Link can attack Magtail's eye without using a parry attack to cause it to curl up in its shell. During this time, Link can attack it to defeat it, or he can lift it and place it down as needed. Magtails live near lava environments, including Dragon Roost Cavern and Fire Mountain.